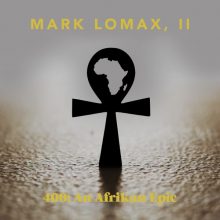 As we start a new year and look forward to the months ahead, it’s important to look back and reflect on the past. Although not a positive milestone, 2019 marks the 400th anniversary of the beginning of the transatlantic slave trade. Drummer, composer, and educator Dr. Mark Lomax, II used this anniversary as inspiration for 400: An Afrikan Epic, his magnificent 12 album cycle that tells the story of Black America. END_OF_DOCUMENT_TOKEN_TO_BE_REPLACED