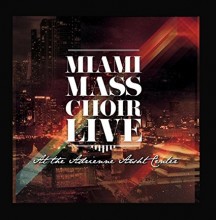 Ok, real talk—I like gospel music. After all, gospel music is the ‘mothership’ of all black music: Mahalia Jackson, Sister Clara Ward, Shirley Caesar, and of course Aretha Franklin, who brought the church with her to Muscle Shoals, Alabama. The Staple Singers kept their gospel roots when they crossed over, as did the great Sam Cooke. The Hawkins Singers “Oh Happy Day” was broken on college radio. The New Jersey Mass Choir was brought to our attention when Foreigner had them sing backup on “I Wanna Know What Love Is.” And in the ‘90s, Jimmy Jam & Terry Lewis struck gold with the Sounds of Blackness when the single “Testify,” from the group’s national debut album The Evolution of Gospel, crossed over into dance and soul.

So, after listening to the Miami Mass Choir, where do they fit in? First off, when one thinks of Miami, gospel music is not the first thing that comes to one’s mind. Rev. Milton Bingham, the head of Savoy Records’ gospel division and founder of the Georgia Mass Choir, helped form the Miami Mass Choir in 1996 with Pastor Marc Cooper, the choir’s director and lead singer. Their 1997 debut album, Its Praying Time, produced the hit song “It Is For Me,” and was followed three years later with Just For You.

On their new album, Live at the Adrienne Arsht Center, the Miami Mass Choir takes you to the mountain. The praise and worship song “Lord of Everything,” featuring Danette Inyang, is uplifting to the almighty high. They praise the King and thank him for all he’s done. That theme continues throughout the album. On “I Will Rejoice,” featuring Mark Cooper and Joy Cooper, the choir lets their hair down. Featuring a very funky bass, Marc Cooper talks via sermon, telling the audience to ‘praise him’ and the brass section pays attention. Other guests include Betty Wright, Beverly Crawford, Zacardi Cortez, JaLisa Faye and Avery Jones.

Perhaps the one eyebrow raising track is “Good News,” featuring Tony Lebron and Paula Coleman. Latin gospel. Yes Latin Gospel! After all, it is Miami. Cuban music has a huge influence, and the choir is multicultural. The opening sounds as if Carlos Santana was in the band, while the choir responds throughout, ‘I Got Good News.’

The Miami Mass Choir isn’t necessarily looking to get into the top 40 with this album, though the radio single “Lord of Everything” is climbing the charts. Live at the Adrienne Arsht Center is traditional enough to keep the old timers, while incorporating new sounds to draw newcomers. Raise your hand and close your eyes!