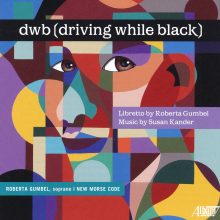 dwb (driving while black) is a chamber opera with a few modern twists. Composer Susan Kander and librettist/soprano Roberta Gumbel join to tell the story of a loving Black mother who anxiously watches her son grow. She battles with his increasing desire for independence and her fear for his safety. Each scene features the vocalist and accompanying instruments, sung from the perspective of the mother. Progressively, we see her interact with her son in the car at different stages in his maturity. Interjecting the scenes are bulletins performed by a singer, cellist, and percussionist that represent the “dangerous world beyond the Mother’s control.”

Kander wrote a score filled with musical dimension and complexity. Her use of color and dissonance is punctuated by Gumbel’s libretto. Gumbel explains in the liner notes that the libretto was written from her own experiences with her son. As a singer, her connection to the text was complimentary to her passion-filled vocalism. On this world premiere recording of the work, Gumbel sings the soprano role while the accompaniment is performed by the ensemble New Morse Code, featuring cellist Hannah Collins and percussionist Michael Compitello. In addition to their dramatic speaking parts during the bulletins, they are an effective orchestra, capable of amplifying the importance of this opera’s message. The collaboration between Kander, Gumbel, and New Morse Code has resulted in a poignant piece on love and fear.