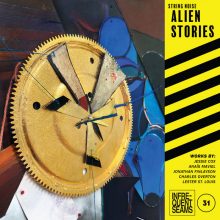 The New York-based classical avant-punk duo String Noise, featuring violinists Conrad Harris and Pauline Kim Harris, is celebrated for their wide-ranging performances of contemporary music. Since the duo’s founding in 2011, they have added more than 50 new works to their repertoire. Their latest release, Alien Stories, was influenced by the Black Lives Matter movement, which also increased attention on issues of racial equality with the musical realm. In support of Black artists, the duo decided to co-commission, with Carnegie Hill Concerts, new works from five young Black composer-performers based in New York City. These five works are featured on Alien Stories.

The album takes its title from the opening track by Jessie Cox. The Swiss-born composer and drummer with roots in Trinidad and Tobago is currently pursuing his Ph.D. at Columbia University, but has already composed over 100 works for various jazz, chamber, and orchestral ensembles ranging from the LA Philharmonic and Orchestra of St. Lukes to the ICE Ensemble and Promenade Sauvage. “Alien Stories,” Cox’s response to the alien virus at the root of the pandemic, is the longest track on the album and one of the most avant-garde, with a sparse, percussive soundscape that often mimics electroacoustic music. Cellist and composer Lester St. Louis also specializes in experimental, improvisatory music. His work, “Archive01 [Absolute Recoil],” features flights of sound, often pairing a more legato, melodic line against percussive and atonal sound effects in the second violin.

From here the project shifts away from the purely experimental to more tonal works. Anaïs Maviel, a vocalist, percussionist, composer dedicated to cross-disciplinary works and the power of music as a healing and transformative act, offers “La Púyala Muntá.” Opening with a simple dance form that become increasing complex, the arpeggiated melodic line is pitted against scraping bows in the second violin, then segues into a joyous fiddle tune that gradually fades off in the distance with whistle-toned harmonics. Classical and jazz harpist Charles Overton’s “Only Time Will Tell” reflects the uncertainty of the present, swaying between delightful jazz passages and more tentative, reflective moments.

The album concludes with Jonathan Finlayson’s “Yet To Be.” A trumpet player, Finlayson attended the New School for Jazz and Contemporary Music and has been a disciple of the saxophonist/composer/conceptualist Steve Coleman since he joined his band Five Elements in 2000 at the age of 18. Written while quarantining in the woods, Finlayson says his work “is in many ways a reflection of me watching from a distance as things unfold.” Portraying both a tentative and optimistic air, the piece opens with a soaring melodic line over an ostinato pattern that becomes increasingly agitated, perhaps reflecting both the hope and despair of elements outside of our control.

String Noise offers nothing short of a virtuosic performance of these five new works, bringing attention to young composers who have so much to offer. Alien Stories belongs in any collection of contemporary music.