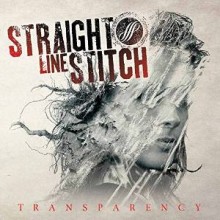 2015 saw a new EP from hard-rockers Straight Line Stitch.  The seasoned group has been fronted by Indianapolis native Alexa Brown since 2003, and has come into its own in a way that few female-fronted bands have been able to in a genre that is typically thought of as male-centered.  On Transparency, Brown delivers the typically-cryptic and vaguely-apocalyptic lyrics that characterize this style of hard rock, alternating between “cleans” and screamed vocals on lines like “I lost my way in your retribution/but give me absolution” from “Human Bondage.”

It is a marvel that Brown is able to achieve the pristine vocal sounds that she does on this record after 12 years of screaming on stage, but indeed, her voice is as good as ever.  Brown’s vocals are complimented by band mates Darren McClelland (bass) and Jason White (guitar) playing riffs that—while not necessarily instant classics—certainly compliment the lyrical and emotional territory the band explores.  The rotating drummer’s chair is filled with lots of bright cymbal crashes and extensive double-bass work.  This is not a shred metal band or pop-oriented hard rock group, and those looking for virtuosity or rock-radio hits should probably look elsewhere.  With that said, Straight Line Stitch has a well-conceived and well-defined sound and Transparency is a tight package of arrangements that serve the group’s songs well.