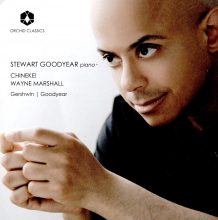 Young pianist Stewart Goodyear already has several accolades. Described as “a phenomenon” by the Los Angeles Times, he has performed with leading orchestras in North America, Europe, and Asia. In addition to his success as a performer, recording classical repertoire standards such as Beethoven’s piano sonatas and Diabelli Variations and piano concertos by Rachmaninov, Tchaikovsky, and Grieg, among others, Goodyear is also an accomplished improviser and composer. This new recording allows him to showcase both sets of talents, with a performance of Gershwin’s Rhapsody in Blue in its original jazz band orchestration paired with Goodyear’s own Piano Sonata and his suite for piano and orchestra, Callaloo. He is accompanied by Chineke!, an orchestra founded in 2015 to give career opportunities to young Black and minority ethnic performers in Europe. The group’s founder, Chi-chi Nwanoku OBE, stated that her “aim is to create a space where [Black and minority ethnic] musicians can walk on stage and know that they belong, in every sense of the word.” For this recording, the musicians perform under the baton of celebrated Black conductor and pianist, Wayne Marshall.

The opening work on the CD is the premiere recording of Goodyear’s Callaloo from 2016. In addition to borrowing some of the styles and instrumentation from Gershwin’s Rhapsody in Blue, Callaloo is an intentional blending of several different styles mimicking the calypso influences in Trinidad (jazz, African, and French). Goodyear, a Canadian with British-Trinidadian background, was also inspired by musical elements of Trinidadian Carnival, which can be heard throughout the work. The first movement, Panorama, represents the competition between steel drum groups at Carnival with three different, competing themes, inspired by Calypso sounds and reminiscent of some similar works by Leonard Bernstein. Goodyear describes the second movement, Mento, as an “homage to the Jamaican folksong.” A bit slower than the vivacious opening of the suite, it features a reduced orchestration of only piano, strings, and horns, as well as a hemiola-like shift in the middle section into a ¾ meter inspired by Afro-Cuban styles. The third movement is another mento, but this time in the style of a ballad like those by Harry Belafonte. The song-like melody flows back and forth from piano to ensemble (with reduced instrumentation of low strings, woodwinds, and percussion), acting as a relaxing rest period before the conclusion of the suite. The fourth movement, a cadenza for piano alone, begins slowly with quartal and quintal harmonies, then moves into constantly shifting styles toward the middle, going from sequences to pointillistic texture and jazz-inflected scalar passagework. The cadenza builds in speed and intensity before it almost seems to crash into the final movement, Soca, which brings the full ensemble back in to represent the Mas, the finale of Carnival with soca bands, DJs, and dancers in costume parading down the street. The piano continues some of its scalar and sequential passages from earlier in the suite, and the rest of the ensemble is allowed to shine in short soli passages. There are sharp brass and percussion interjections throughout, including an extended percussion “break” toward the end of the movement featuring the bongos. The work as a whole showcases the musicianship and energy of Chineke!, supporting Goodyear’s sharp and concise pianistic technique.

Goodyear’s Piano Sonata showcases his talents as a solo pianist with a technically challenging work. Composed when he was 18, the pianist intentionally created a difficult piece, which Goodyear himself describes as “a combination of piano virtuosity, teenage hubris, and the popular music [he] heard in 1996.” Like Callaloo, the Piano Sonata features a blending of styles. The format is that of a traditional piano sonata, with the first movement in a sonata-allegro form, a slow second movement, and a final movement rondo. However, the musical materials are anything but ordinary. The sonata-allegro movement opening merges tonal, atonal, and 12-tone structures with techno music, and the resulting blistering virtuosic passages flaunt Goodyear’s technical skill. Likewise, the second movement is a slow ballad inspired by pop music, making it a gentle contrast to the first movement, with lush, full textures and a singing melodic line. The final movement serves as somewhat of a precursor to the eclectic styles in Callaloo, blending rock music, Canadian folk, Indian vocal techniques, and Latin-infused rhythms. The rondo form allows for an interplay and juxtaposition between these differing styles, which also demonstrate Goodyear’s versatility as a pianist as he moves from meandering scalar passages to fast blocks of ostinati.

The recording ends with Gershwin’s Rhapsody in Blue, one of Goodyear’s inspirations for Callaloo. Although normally performed in the symphonic setting from 1942, Goodyear and Chineke! choose to present it here in its original jazz band instrumentation from 1924, originally performed by Paul Whiteman’s band with Gershwin as the soloist. This instrumentation, focusing on solo performers in the ensemble, gives the winds and brass more chances to shine, and the members of Chineke! do so wonderfully, right from the start of the famous clarinet glissando opening. Goodyear’s piano pops brilliantly out of the texture for the solo sections, and if at times he takes more liberties with the tempo and rubato sections than some other pianists, this choice fits in with Gershwin’s intention to show that jazz did not need to be kept strictly in time. The bookending of Callaloo and Rhapsody in Blue on this recording also showcases the relationship between these two pieces in both instrumentation, structure, and blending of styles.