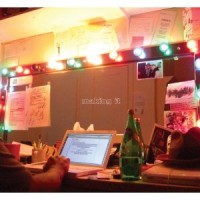 Stew (founder of the band The Negro Problem) and Heidi Rodewald, songwriting duo of the Tony winning play-turned-Spike Lee film Passing Strange, have come together again on Making It. While the title might suggest showbiz success, it’s actually an exploration of their personal relationship, in the same manner that Passing Strange was a semi-autobiographical coming-of-age story. The former couple broke up in the midst of performing Passing Strange, leading to a very intense and uncomfortable time. It is this relationship, and the post-relationship woes that fuel the songs on the album.

Much of Making It opts for the mellow side of the musical spectrum. “Pretend,” “Love Is a Cult,” and “Tomorrow Gone” are chilled-out and extremely personal narratives. Stew and Heidi often trade off on the vocals, and the mixes and transitions are very well executed.  For many listeners, the emotions pushed through the music and lyrics will be very relatable, conjuring memories of similar experiences and emotions. For Making It, the ability to connect with listeners is the album’s greatest triumph, and serves as a return-to-force for Stew & The Negro Problem.

The group is currently working on a song cycle project focusing on different cities, beginning with Chicago. Let’s hope this new project soon comes to CD or DVD.