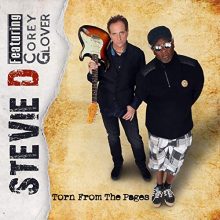 Stevie D, a.k.a. Stephen DeAcutis, has teamed up with Living Colour vocalist Corey Glover on his debut album, Torn from the Pages. Not to be confused with the Buckcherry guitarist, DeAcutis is more often thought of as a producer and engineer who has recorded and mixed albums for pop stars such as Cyndi Lauper, as well as metal heavyweights Nuclear Assault and Overkill. However, on this project, Stevie D demonstrates his chops as a songwriter as well as a guitarist, proving throughout the album that he is a strong lead player who is also capable of some blistering guitar work. The pairing with Corey Glover, for whom DeAcutis has engineered and co-produced projects in the past, is a seamless collaboration that never feels forced. In fact, Torn from the Pages could pass as a release by a long-standing band.

The duo starts things off with “Your Time Has Run Out,” a heavy tune driven by chunky guitars and Glover’s signature vocal style. The album continues down this heavy path with “Wake-Up Call,” reminiscent of songs by Alice In Chains and Stone Temple Pilots, and “Fay,” which also pays homage to hard rock bands from the early ‘90s. “Haunted” stands out as one of the slower tunes on the album, and its triple-meter groove reveals a strong blues influence. The backing vocals imply the presence of a gospel choir, which pairs perfectly with the soulful vocal style of Glover. Highlighting this album’s diversity from a songwriting standpoint, “Now or Never” features a funky, horn-punctuated groove that leads to an unconventional chorus.

“Final Resting Place” is perhaps the strongest track on the album. Opening with Glover singing unaccompanied, it evolves into a well-written rock song. The feel of this intro returns in “Final Resting Place Reprise,” one of the most unique tracks on the album that consists solely of Glover singing a cappella, and its gospel influence is undeniable. The following track, “Face Plant,” is purely instrumental, closing the album in a dichotomous fashion.

Though many influences can be heard in the guitar playing and production style of Stevie D, Torn from the Pages is best described as a hard rock album from the late ‘80s or early ‘90s. For fans of that era, this is a nostalgic journey back to when guitar was king. But it is Corey Glover’s contributions that really push these tracks to the next level. Whereas many hard rock vocalists from his era have seen their vocal abilities diminish, Glover sounds as compelling as he did in his heyday. In fact, an argument could be made that he sounds better than ever. As for Stephen DeAcutis, this collaboration with Glover reveals that he is the complete package. Fans of Living Colour will want to give this album a spin, and aficionados of guitar playing will enjoy it too.