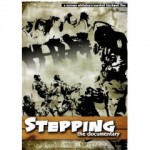 Stepping is a type of percussive dance that has its origins in the culture of Historically Black Fraternities and Sororities. In stepping, the whole body becomes an instrument as music is made by the combination of handclaps, stomps, and other actions. Members of African-American fraternities and sororities have traditionally performed step routines at parties, exhibitions, and competitions. Recently, other communities, including Latino Greek Letter Organizations and church youth groups, have begun to organize competitive step teams. The release of the 2006 film Stomp the Yard raised the visibility of stepping, bringing it to mainstream.

In Stepping: The Documentary, filmmakers Marshall Blackwell and Norman Whiteburn detail the history and aesthetics of stepping, especially as it relates to Black Greek culture. The film is primarily comprised of step performances and interviews with Black Greeks, which allows the art and the artists to speak for themselves. There is a very strong balance between context and performance which provides the viewer with the full scope of stepping culture. The history of each Black Greek organization is presented in great detail and accompanied by elaborate step routines. All of the interviews with Black Greeks are extremely engaging and add a very personal feel to the film itself, while providing an intimate look at stepping.

While Stepping provides a good overview of a historically under-explored cultural performance, the documentary does have a few problems. The film focuses on Black Greeks, but does not feature all of the Divine 9, the nickname for the nine most prominent Historically Black Greek Letter Organizations. Alpha Phi Alpha, the first intercollegiate Black Greek organization, is discussed heavily, but there is no corresponding step routine for them. Alpha Kappa Alpha, the first Black Greek sorority, is not featured at all. Additionally, there could have been more examples of how stepping exists outside of Black Greek culture. These omissions render the documentary somewhat incomplete.

These issues aside, Stepping: The Documentary is a very informative film. The filmmakers did an excellent job of keying in on important aspects of the performance and the culture. This DVD is recommended for anyone interesting in stepping as it is a good introduction to the art form and Black Greek culture.