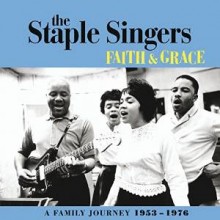 This is proving to be a great year for fans of the Staple Singers. In March, Legacy re-issued their 1965 album, Freedom Highway Complete: Recorded Live at Chicago’s New Nazareth Church (reviewed here), to commemorate the 50th anniversary of “Bloody Sunday” and the subsequent Selma to Montgomery march—a pivotal moment in the Civil Rights Movement. Now, just in time for the holidays, we’re blessed with Concord’s limited edition 4-CD box set, Faith & Grace: A Family Journey 1953-1976, the first comprehensive overview of the group’s career. Drawing from over two decades of material in the vaults, the set includes both live and studio recordings. Also included are some tempting never-before-released rarities, of which the pièce de résistance is the bonus 7-inch vinyl disc featuring the earliest known recordings of the group (“Faith and Grace” ; “These Are They”) from a 1953 limited edition self-released 78-rpm disc on the Royal label.

Family patriarch Roebuck “Pops” Staples, a guitarist and singer noted for his high tenor voice and falsetto, formed the Staples Singers in 1949 with his son, Pervis (tenor), and two of his young daughters, Cleotha (alto) and Mavis (contralto and bass)—who usually sang lead with her father. Another daughter, Yvonne, would later join the quartet, alternating with Pervis and Cleotha. Originally from Mississippi, Pops was exposed to both secular music, primarily the Delta blues, as well as sacred, performing in church choirs and with the vocal group Golden Trumpets. When the family moved to Chicago in the 1930s, bringing their country styles with them, they were initially ridiculed in the big city (as were most rural southerners during the Great Migration). However, it would be this unique fusion of country blues, folk spirituals and gospel quartet influences that propelled the family to stardom—especially in the late 1950s and 1960s with the burgeoning Civil Rights Movement and subsequent flowering of soul music.

Disc one, sequenced chronologically, covers the early years from 1953-1960. Opening with two songs recorded on September 7, 1953, the group lays into Pops Staple’s original “It Rained Children” (United 165) and a traditional song “I Just Can’t Keep It to Myself” (Gospel/Savoy LP 3001), both accompanied on piano by Evelyn Gay of the popular Gay Sisters, who only sat in at the insistence of the studio head. All of the remaining songs were accompanied by Pops on guitar and were recorded at Chicago’s Universal Studios for release on the African American owned Vee-Jay label, where Ewart Abner was responsible for signing the group. Also included is the previously unreleased song—“I’ve Got a New Home” from 1955. This disc brings out the raw gospel “straight from the church” side of the Staple Singers and, with the exception of their first major hit “Uncloudy Day,” many of these songs are likely not well-known to the average listener. The disc also highlights the remarkable talents of the precocious Mavis, who was only 14 when the initial tracks were recorded.

Disc two continues with Vee-Jay recordings from 1960-1961, beginning with “Will the Circle Be Unbroken” and including traditional songs such as “Swing Low” and “Stand By Me.” A previously unreleased full version of the medley “Too Close/I’m On My Way Home/I’m Coming Home/He’s Alright” from a live performance recorded in Clarksdale, Mississippi in 1960 is a highlight of this disc. When the group moved over to the New York based Riverside label in 1962, they released the album Hammer and Nails (Riverside 3501). Under the direction of Orrin Keepnews, the seven songs included here from Hammer and Nails showcase a much more pop-oriented sound, purposefully targeted to a broader audience well beyond the Black church. The remaining tracks are drawn from several Riverside albums: “There Was a Star” and “Use What You Got” (with Maceo Woods on organ) from the Christmas album The 25th Day of December (Riverside 3513); “Let That Liar Alone” and the popular folk songs “Blowin’ in the Wind,” and “This Land Is Your Land” from the album This Land, with Phil Upchurch and Johnny Pate on bass (Riverside 3524); “I Know I’ve Been Changed” from the album Great Day (Milestone M 470280, though this citation does not appear in the notes) ; and “I Can’t Help From Cryin’ Sometime” from the album This Little Light (Riverside 3527).

Disc 3 represents the greatest transitional period, including material from 1964-1969 recorded for several labels: three tracks from Riverside (all from This Little Light), then moving on to “Wish I Had Answered” from the Live at Newport album on Vanguard; two tracks recorded for the D-Town label’s devotional series including “Tell Him What You Want” and I’ll Fly Away”; 11 tracks from the Epic label which includes their socially conscious song “Freedom Highway;” and three of their first songs on the Stax label including “Long Walk to D.C.,” “Slow Train” and “Got to Be Some Changes.”

Disc 4 is comprised almost entirely of the Staple Singers’ Stax output, where they were molded into soul music superstars. Included is their great message song about reparations, “When Will We Be Paid,” and “The Ghetto” from the albums Soul Folk in Action and We’ll Get Over, plus their biggest hit of all time, “Respect Yourself,” and four other songs from the album Be Altitude: Respect Yourself. Also included are two songs from the album Be What You Are, “Back Road Into Town” from City in the Sky, and “Let’s Do It Again,” released on Curtis Mayfield’s Curtom label. The set closes with a version of the song “The Weight,” recorded in 1976 with The Band (featuring Levon Helm) for the famous Martin Scorsese documentary The Last Waltz, plus a bonus demo track of “Respect Yourself.”

The handsome packaging includes a forward by Mavis Staples along with informative liner notes by James Miller, gospel historian Opal Louis Nations, and compilation producer Joe McEwen, accompanied by many full color photographs. It should be noted that a few typos and omissions have crept into the text, and the CD sleeves are too tight and must be loosened to allow safe removal of the discs. But overall this is a fabulous tribute to the Staple Singers, covering the full range of their output from the “country gospel sounds of the Mississippi Delta” to the peak of their career as soul royalty, “God’s greatest hitmakers,” and icons of the Civil Rights Movement. Don’t wait too long to purchase a copy—this set may be sold out by the end of the year.