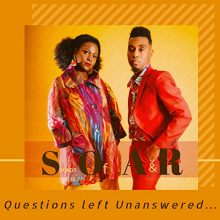 Jazz ensembles fronted by a vocalist and trumpeter in equal roles are far and few between, and that’s a major part of the charm of Sounds of A&R. Led by April May Webb (vocals) and Randall Haywood (trumpet and flugelhorn), who are musical partners as well as partners in life, the duo calls to mind the classic pairing of Ella Fitzgerald and Louis Armstrong. Rounding out this family affair are two of Webb’s siblings—Jacob Webb on bass and Nathan Webb on drums—plus guitarist Charlie Sigler, pianist James Austin, and harpist Riza Printup. On their impressive third studio album, Questions Left Unanswered, S.O.A.R. offers a mix of new arrangements of romantic classics and bold, fresh originals that speak to contemporary issues.

In their album trailer, April and Randall explain that the project’s title speaks to the self-discovery that occurs while dealing with life’s highs and lows, joys and sorrows. When there is not a clear path forward, many questions are left unanswered. Life is a journey, and the duo invites listeners along for the ride as they explore the past and the present while also voicing their hope for the future.

Following this trajectory, the album opens with “Thus the Beginning,” as April recounts her first meeting with Raymond in a club where both were performing. Following are a pair of covers that also speak to relationships: Gigi Gryce’s “Social Call” about the potential reunion of former lovers, and a delightful jazz version of Dolly Parton’s classic “Jolene” that features a lively interplay of vocal scatting and improvisatory trumpet licks. S.O.A.R. also offers two versions of the Roberta Flack classic, “Killing Me Softly”—a more straight ahead arrangement that one might hear in a night club setting, and a later “Reprise” of the tune that eschews most of the lyrics in favor of extensive improvisations.

Many of the songs on the album were penned by April, including two very inspiring originals. A sensuous harp and bass duet ushers in “The Skin I’m In,” a reflection on equality as “the biggest illusion.” April expresses these emotions as she sings: “Every day I’m Black…you don’t see the soul within, you just see the skin I’m in…the essence of what I’m made of is what you’re afraid of.” Her more traditional uptempo jazz tune, “They Keep Saying No,” bears a definite influence from jazz vocal greats of the past, showcasing April’s phenomenal scatting technique. The song reflects her frustrations with the mainstream music industry and encourages artists to power through disappointments and continue working towards their goals.

Two additional highlights are “Dark Brown Eyes,” another April original that’s focused more on the instrumental aspects of the ensemble, as is “Moments When I Was a Kid.” Co-written by Randall and April, this song juxtaposes an intricate, syncopated bass line groove with an interesting harmonic progression as April sings about the joys of childhood.

Though S.O.A.R. has a large fan base among New York jazz clubs, Questions Left Unanswered is this listener’s first introduction to the group. Based on the broad range of styles and originality presented in this album, I highly recommend that all fans of vocal jazz take a listen.