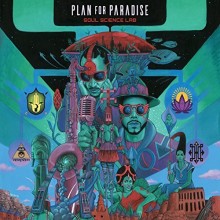 October 2016 saw a strong release by the eclectic hip hop duo Soul Science Lab, a rap group that proclaims itself as “Innovative.Afro.Futuristic.Griots” on the mbira-driven first track of Plan for Paradise. This appears to be an accurate description of the music that artist and musician Chen Lo and multi-instrumentalist, composer, and producer Asante’ Amin create.  The duo’s songs are compelling and innovative, indicative of the group’s sprawling vision and overall high artistic standards.

At first listen, the offbeat and hip sensibility of Plan for Paradise will likely remind listeners of work by De La Soul or A Tribe Called Quest.  Like these earlier pioneers, Soul Science Lab’s soundscapes are heavily influenced by jazz and other musics of the African Diaspora.  However, SSL’s music is not simply a throwback to the heyday of the Native Tongues collective.  Stylistically, the music broadens out to a variety of other genres, such as the gospel shout on “Gimme That,” hard rock on “Built My City,” Spanish guitar on “Kingmaker,” and electro funk on “Spend Some Time.”

Lyrically, SSL addresses everything from their Afrofuturistic artistic vision to spiritual themes (“Supernatural”) to contemporary social issues (“I Can’t Breathe”), the latter with a rare poignancy in an age full of attempts at political music. The lyrics on Plan for Paradise, while appearing aspirational on many tracks, demonstrate a deeper understanding of the underlying themes.  That is to say, the political songs aren’t political because it is fashionable to address current events—rather, they suggest the artists’ abiding concerns and nuanced understanding of the issues at hand.

Overall, Plan for Paradise is a great listen from a group whose members boast an impressive resume, both due to their collaborations with other artists and in their work with arts education (detailed on the group’s website).  Listeners can hope that this is the first in a long line of innovative.Afrofuturistic albums.

Note: The album cover uses the Augmented Reality technology of Blippar to create an interactive experience, as demonstrated in this video.