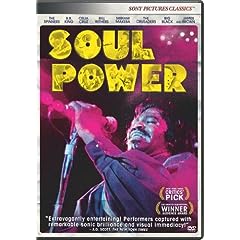 In 1974 Muhammad Ali was scheduled to fight George Foreman in Kinshasa, Zaire to regain the World Heavyweight title. The promoter of the fight was the always-colorful Don King. In conjunction with the fight (a.k.a. “The Rumble in the Jungle”) a large concert was planned featuring American and African and Latin pop stars. A few weeks before, Foreman cut himself and the fight had to be postponed. But there was money to be made on the concert so – with private financing from some Liberians – the show went on. Soul Power is a documentary on the staging of the concert, and is now making its debut on DVD.

If you are looking for a “Woodstock” experience or even “Wattstax,” you might be disappointed. Less than forty percent of the screen time is devoted to musical performances. In fact, except for an opening number by James Brown, there is no music footage for the first 33 minutes of this 93-minute film. What you do get to see is a lot of the planning – especially when the “money man” has some issues – and setting up the stage. And there is Ali talking about the race issue in the U.S. (in his trademark rhymes).

When we get to the concert, things kick in with some incredible – and sometimes unusual – performances. Bill Withers plays a solo acoustic guitar in a strong vocal performance. Miriam Makeba explains her “Click Song.” The Fania All Stars (with Celia Cruz) and the Crusaders do their thing and B.B. King does his “Thrill is Gone” for the umpteenth time. Surprisingly the performers are never identified until the closing credits! Some of the performers are not known in the U.S. and, even those that are (Withers, for example) will be new to younger viewers. No performer gets more than one song – except Brown, who gets two.

Following is the official trailer (Courtesy of Sony Pictures):

Bonus features include a commentary track by the Director and Festival Producer and 42 minutes of Deleted Scenes. These scenes include five minutes of rehearsals (mostly Cruz) and one performance by Sister Sledge (who is not featured in the released film). And then there is the best three minutes on the whole disc: James Brown, in a hot and SWEATY performance of “Try Me.” Why this was deleted is a mystery to me but it’s a classic moment and captured in amazing close-ups.

So, as a documentary Soul Power serves its purpose of capturing this specific period in time and place. But there is less music than some might hope for, so know that you probably won’t be watching it through multiple times (like “Woodstock” or “Wattstax”). Nevertheless, its great that the film is finally available.

Reviewed by Steve Ramm (“Anything Phonographic”)