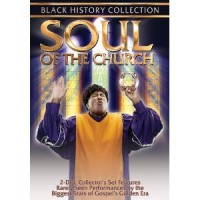 Every fan and performer of gospel music will want to rush out and buy this new DVD set, which features 8 hours and 16 minutes of unadulterated performances from TV Gospel Time. The half hour Chicago-based syndicated show aired on NBC Sunday mornings from 1962-1965, the forerunner of the more famous Chicago gospel series, Jubilee Showcase. Hosted by various big-name gospel artists, the shows focused entirely on the music and were devoid of any overt religious messages or sermons. Consequently, they introduced black gospel music to a much broader audience during the peak years of the Civil Rights Movement.   Of the more than 60 shows broadcast in the early ‘60s, 16 extant programs have been selected for this set.  Transferred from kinescopes, the picture is often poor and the sound quality only fair (as one might expect), but the rousing performances more than compensate for any flaws.

According to the very scant notes on the box, the guests were usually filmed on location to save on travel costs (specific locations are not indicated, though are occasionally mentioned by program hosts).  Consequently, guests include a mix of recording artists and regional talent, with back-up choirs drawn from local congregations such as the Golden Leaf Baptist Choir of Memphis and the combined Gospel Light and Glory Gospel Choruses of Charlotte, North Carolina.  Song choices are Golden Age classics, such as “Every Time I Feel the Spirit” (sung by Marie Knight), “Nobody Knows” (Highway QCs), “I’m Goin’ Home on the Morning Train” (Ruth Brown), and “There’s Not a Friend Like Jesus” (Ernestine Washington).  This is down home gospel, straight from the church to the screen, without any hint of commercialization (other than the commercials for laxatives and skin lightening creams).

Of the eight shows included on Disc 1, three are hosted by James Cleveland (with the St. Pauls Disciple Choir, Rising Echoes, and Georgia Lewis), two by Marie Knight (with the Pentecostal Temple Choir and Golden Leaf Baptist Choir of Memphis, the Highway QCs, and the Caravans with Albertina Walker), and one each by Tommy Brown (with the Gospel Seekers), Ruth Brown (with the Highway QCs and New Shiloh Choir of Baltimore), and Ernestine Washington (with the Cornerstone Baptist Church of Baltimore and Three Professors of Gospel).  Pressing the boundaries a bit further towards contemporary gospel is a performance of  “Amazing Grace” by the Harmonizing Four, utilizing spoken shouts over electric guitar riffs, and the Mighty Clouds of Joy led by Joe Ligon in an electrified version of their first hit single, “Steal Away.”

Following is a sample clip featuring the Five Blind Boys of Mississippi with the Barrett Sisters singing “Come On Up To Bright Glory”:

Disc 2 follows with eight additional shows, hosted by Goldia Haynes (backed by The Harmonizing Four with the combined Gospel Light/Glory Gospel Choruses), Sister Jessie Mae Renfro (with the Mighty Clouds of Joy), The Original Five Blind Boys of Mississippi (in a fabulous performance with Chicago’s Barrett Sisters accompanied by Roberta Martin on piano and the Thompson Community Singers), Archie Dennis Jr. (with Ethel Davenport, the Olivette Inspirational Choir, and the Pilgrim Jubilee Singers), Larry Fuller (with Vee-Jay recording artist Princess Stewart,  backed by the Bethel Baptist Church Choir of Brooklyn and the Herman Stevens Singers), Frank Davis (featuring The Dixie Hummingbirds legendary performance of “Prayer for Peace” about the assassination of JFK, plus Chicago’s Myrtle Jackson and the Bibleway Joy Bell Singers), Francis Cole (with the Alex Bradford Singers, Sally Martin, and the youthful C.O.G.I.C. Refreshing Spring Choir from Washington, DC), and Betty Johnson (with the Harmonizing Four, Columbus Smith, the Jewel Gospel Singers, and two talented youth choirs from Richmond, VA that steal the show).

Each disc concludes with bonus tracks featuring four minute segments of Mahalia Jackson Sings, filmed in 1961 to use as filler material for other programs.  Here the sound and picture quality is quite good, with Jackson front and center in all her splendid glory (beware of some extremely long pauses between segments). The individual songs are not indexed, but include renditions of “Walk On,” “Lord Don’t Move the Mountain,” “Highway to Heaven,”  “Lord’s Prayer,”  and  “Just a Closer Walk With Thee,” among others (it appears that Infinity will be releasing all of the segments next month on the compilation A Gospel Calling: Mahalia Jackson Sings).

Overall, Soul of the Church indeed documents the gospel roots of soul, offering up “Golden Age” standards alongside transitional performances.  Too bad the producers didn’t spend a little extra money to provide liner notes and a table of contents, since no doubt many educators will want to use this material in the classroom.  Let’s hope that more shows will be released in the near future, including those featuring the incomparable Sister Rosetta Tharpe and the Soul Stirrers, as well as episodes from Jubilee Showcase.