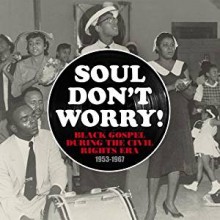 Swedish producer and gospel record collector Per “Slim” Notini’s latest compilation, Soul Don’t Worry!, is a two-CD set devoted to Black gospel music from the Civil Rights Era. Notini’s stated goal is to feature recordings released from 1953-1967 “of which a big portion are rare performances.” Across the 47 tracks there are indeed many lesser known gems, including the title track by Henry Hines & Revelations—a re-working of a classic Thomas A. Dorsey song which closes on the refrain, “But I say to my soul don’t’ worry/the Lord will make a way somehow.” These rarities are interspersed with songs by gospel greats such as Mahalia Jackson, Marie Knight, the Fairfield Four, Staple Singers, and Inez Andrews, chosen to represent the wide diversity of styles in gospel music of the period.

Those more interested in exploring the Civil Rights Era theme will find many songs that directly address racism, resistance, and the struggle to achieve equality, justice, and freedom. For example, the little known group The Ramparts, led by Benjamin “Scatman” Crothers, sing about “The Death of Emmett Till.” Brother Will Hairston of Detroit tells the story of the Little Rock Nine on his song, “Shout School Children.” After the assassination of JFK in 1963, Cincinnati’s Trumpets of Joy released “The News That Shook the Nation,” while the Tampa-based Butler-Aires penned “Jackie Don’t You Weep.” Almost nothing is known about the Southern Bells, with the exception of their 1966 anti-war song “Viet Nam,” released on an obscure Atlanta label. The Friendly Four, a vocal quartet from Charleston, South Carolina, offered a tribute to the Freedom Riders with the song, “Where is Freedom,” telling listeners to “remember the wonderful ones, who lost their dedicated lives for the precious purpose, and won’t be around to see it through.”

Soul Don’t Worry! provides a compelling overview of gospel music during the Civil Rights Era, with songs that served both the Lord and the movement, some never before released on CD.