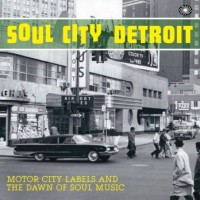 This 2-CD compilation of “Motor City Labels and the Dawn of Soul Music” marks the debut of the new series Soul City by London’s Fantastic Voyage. The goal of the series is to explore “the music being produced in key centres in the early 1960s, when R&B was evolving into the style that was soon widely referred to as soul.” Kicking off with an overview of Detroit, the set begins early in the decade when Motown “was but a bit-part player” in the city’s musical output. Tracks were drawn from lesser known labels including Lu Pine, Flick, Harvey, Correc-Tone, and Mel-o-dy labels, but fully half if not more of the set features early (1960-1962) tracks released on the Motown, Tamla and Gordy labels. Though most soul music fans will likely have the majority of these tracks in their collections, this set does offer a hefty illustrated booklet with liner notes by Clive Richardson and will be useful to those interested in exploring and comparing the early soul output of American cities (Soul City New York was released in July, and Soul City Chicago in September).