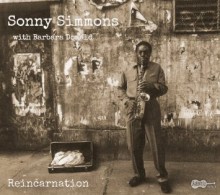 Jazz aficionados may know Sonny Simmons as a minor personality who briefly recorded with luminaries such as Eric Dolphy and Elvin Jones.  They may also be aware of his musical partner and wife, Barbara Donald, who appeared on several of Simmons’s recordings as a leader during the 1960s and 1970s.  It is less likely that they are familiar with the duo’s son, Zarak Simmons, who appeared on Sonny’s 1994 disc Ancient Ritual as well as a few other recordings.  The new Arhoolie records release, Reincarnation, captures a rare set in which husband, wife, and son performed in the same combo, recorded live during a 1991 set at Barb’s BBQ in Olympia Washington.

Those familiar with the work of the elder Simmons and Donald may be surprised at how inside this set is, compared to the duo’s more avant-garde releases from decades past.  The original compositions on Reincarnation have audibly conventional changes, and the album includes two fairly straightforward renditions of songbook ballads, “Body and Soul,” and “Over the Rainbow,” neither of which, it may be argued, set any new standard for interpreting the tunes.  However, those looking for the playful experimentation that characterizes much of the duo’s older work will not be disappointed–Sonny plays the same long, angular alto solos that made him famous (“American Jungle Theme”), while simultaneously weaving large intervallic jumps and squeaks in with flurries of bop lines make the changes in swinging fashion (“Body and Soul”). Donald is the far more conservative player of the two, answering Sonny’s squeals and screams with motivic development that could have been pulled from Kind of Blue (“Ancient Ritual”), and playing it straight and lyrical on her feature tune “Over the Rainbow.”

Zarak’s playing is energetic, although usually busier than the moment calls for–he finds the hits on time on “Ancient Ritual,” and supports the chaotic energy of “American Jungle Theme,” but adds additional punctuation where it isn’t required on the more inside numbers, breaking the solid bop of “Reincarnation” a bit too often and dramatically overplaying on the standards.  The remainder of the rhythm section is solid, with another minor personality, Travis Shook, providing confident, if a bit too low in the mix during solos, piano, and a fairly obscure bassist, Court Crawford, rounding out the rhythm section as a solid rhythmic-harmonic anchor.

Reincarnation showcases the versatility of the pair credited in the title, providing contrast between Simmons’s energetic avant-garde playing and Donald’s more conservative approach to improvisation.  They are accompanied by a competent band, even if the stylistic inflections of particular tunes tend to get lost in the somewhat uncoordinated rhythm section’s accompaniment.