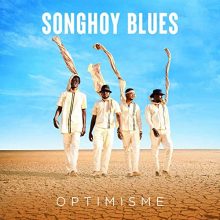 Hailing from Mali, the African rock band Songhoy Blues has returned with their highly anticipated third album, a response to their homeland’s corrupt and oppressive political system. Entitled Optimisme, French for optimism, the album reflects the group’s desire to impact the world around them in tangible and positive ways through their music.

Optimisme builds on Songhoy Blues’ distinctive blend of Western rock and punk with desert blues and traditional Malian influences. The group’s newest single “Barre” features electric guitar riffs and percussion that accompanies lyrics sung in their native Songhai. In the wake of a recent military coup d’etat in Mali, “Barre,” which translates to change, serves as a call to arms for the younger generation to take control and invest in their futures. “Worry,” another single which is the first to be recorded in English by the band, is a song with similarly optimistic and hopeful sentiments.

Like “Barre,” many of the songs on Optimisme feature activist overtones that are universal, accessible, and relevant. The music and message of Songhoy Blues are invigorating and essential, especially in the context of Malian and global politics. Since their formation nearly 10 years ago, Songhoy Blues have gained an international following leading to performances at Bonnaroo, The Royal Albert Hall, and other stages across five continents, in addition to film and television appearances. The band’s surge in popularity will no doubt receive an additional boost from this album.