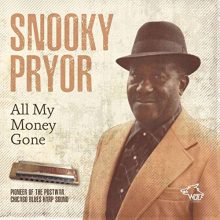 All My Money Gone is the latest addition to the late Snooky Pryor’s catalog. Released by Wolf Records, this album features previously unreleased studio and live material that was recorded in Austria in October 1979. Also included are unreleased songs that Snooky recorded at other sessions such as “Work With Me, Annie,” “Boogie Twist,” “Blue Bird Blues,” and “Telephone Blues”—titled “I’m Gonna Call Up My Baby” on this compilation. In short, this album contains tracks that will be familiar to Snooky fans, but all of the sessions and live performances themselves will be new to the listener.

Although Snooky Pryor does not always get the same level of notoriety as fellow Chicago harmonica great Little Walter, he was one of the first harp players to utilize the amplified harmonica sound. In fact, Pryor claimed to have been the one who pioneered this style. A little less than a decade younger than other Mississippi-born Chicago bluesmen such as Muddy Waters and Howlin’ Wolf, Snooky is one of the quintessential Chicago blues musicians even if his legacy tends to fly under the radar.

Though the name Snooky Pryor implies harmonica, Snooky is a strong vocalist too, and the tunes on this recording stand as evidence of this. There are different combinations of instrumentation represented on this album. “I’m Gonna Call Up My Baby” conveys the spartan feel present throughout, with Snooky joined solely by the electric guitar of Homesick James, who at times merely walks the bassline. Eight of the fourteen tracks feature this pairing of bluesmen, while “Trouble In Mind” features Snooky all by himself on vocals and harmonica. The duo of Snooky Pryor and Homesick James lends itself well to studying previously recorded tracks such as “Work With Me, Annie” in a more stripped-down fashion. Another great duo track is the instrumental “Snooky’s Off The Wall Blues,” which stands out as an example of excellent Chicago nightclub background music.

The title track “All My Money Gone” is a live cut on which Snooky and Homesick James are joined by another guitarist and a drummer. This is arguably the most noticeable track on the album since it’s the only song featuring a drummer, but this is by no means a jab at the other songs. If anything, comparing the other tracks to “All My Money Gone” with its fuller instrumentation, only proves that Snooky was able to sound powerful in any setting. As a testament to the quality of the musicianship on this record, “All My Money Gone” and the other live tracks, which comprise the majority of this release, sound excellent from both production and individual performance standpoints.

The album cover proclaims Snooky Pryor to be the “Pioneer of the Postwar Chicago Blues Harp Sound,” and this is a magnificent harmonica album, but there is more to this recording than merely harmonica. This album is Chicago Blues! It is also worth mentioning that the playing of Homesick James commands the attention of any aspiring guitar player who wishes to learn the art of being a sideman. All My Money Gone is obviously required listening for any Snooky Pryor fan, but anyone who loves Chicago Blues—or even one wanting to capture the excitement of experiencing electric blues in a bar late at night—should give All My Money Gone a test drive. There will not be any disappointment.