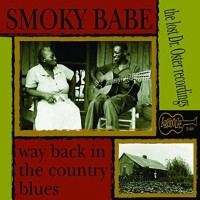 Title: Way Back in the Country Blues

Sixty-five years ago, LSU folklorist Harry Oster was traveling through Louisiana and Mississippi with a tape recorder, looking to document previously unrecorded rural musicians. He came upon Robert ‘Smoky Babe’ Brown (1927-1975) at a party in Scotlandville, a predominantly Black neighborhood in East Baton Rouge described as “a place of BBQ, church suppers and blues honky tonks.” This fertile ground led to numerous recording sessions, and Oster later issued two Smoky Babe albums on his Folk-Lyric label. The label was later sold to Chris Strachwitz, founder of Arhoolie Records, who reissued the LPs, but many of Oster’s original master tapes remained with his widow and were only recently rediscovered. This compilation represents the best of the unissued tracks, bringing these long lost recordings by a little known Delta blues musician back into the spotlight.

All of the 17 tracks are straight ahead acoustic country blues, featuring Smoky Babe’s finger-picking and strumming guitar style on original songs that tell stories of Southern culture. Highlights include “Chicago Bound,” with its tale of the Great Migration and unique harmonic progressions and dissonances, and “On Mr. Walter’s Farm” which is likely biographical, harkening back to Brown’s early years as a sharecropper in Mississippi “picking cotton” and “pulling corn.” Likewise, on the opening track, “Boss Man Blues,” he sings about “driving my boss man’s tractor all day long” and laments “me and the boss man just don’t get along.”

Many thanks to Arhoolie Records for providing this time capsule of rural life in the Delta, performed by a self-taught musician who apparently never aspired to be a professional, yet left an indelible imprint on the blues.