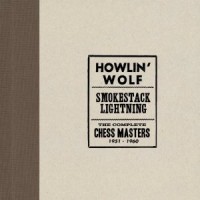 The title of this 4-CD set is misleading.  It’s “complete” only in the sense that it seems to include every scrap of tape in the Chess vaults that Universal Music Group can legally establish as theirs (other takes from sessions recorded in 1951-53 by Sam Phillips in Memphis were not sent to Chess and therefore can’t be claimed by Universal, plus Wolf made recordings for the Los Angeles-based Bihari brothers in the same period).  And, since the set includes what seems to be every inch of tape from every Wolf session that could be dug up, it’s much more than “masters.”  Depending on your perspective, this is a good thing or a bad thing.

What is not in doubt is the lasting power and influence of Howlin’ Wolf (Chester Arthur Burnett).  Wolf was a second-generation Delta bluesman, heavily influenced by Charlie (Charley) Patton and taught harmonica by Rice Miller (Sonny Boy Williamson II).  His early musical idol was Blind Lemon Jefferson, and he played juke joints and house parties in the 1940s with Son House and Willie Brown.  By 1951, he was in Memphis, and was discovered by Sun Records owner Sam Phillips.  It was Phillips who famously described Wolf’s brand of blues as “where the soul of man never dies.”

This set traces Wolf’s evolution from an early 50’s style of Delta “country” blues with electric guitar added, to rockabilly influenced fast 1-4-5 blues in the mid-50s, to the beginning of his successful collaboration with Willie Dixon and Hubert Sumlin in Chicago―a period in which he took the blues in a new direction with a strong overlap toward rock music.  Indeed, Wolf’s evolving sound influenced rock musicians in England and America, and their sound was heard and absorbed by both Dixon and Wolf. But all that happened after the time period covered in these four discs. What we hear is Wolf coming out of the country and finding a very unique sound and style after moving to Chicago in 1954.

It’s worth noting that Wolf was already in his early forties when these sessions began. He had a mature performance-hewn style and had spent a decade playing the ensemble form of blues that took hold in the 1940s. So it’s not surprising that his first session with Phillips, in the summer of 1951, netted “Moanin’ At Midnight” and “How Many More Years,” both sides of a successful single and both tunes appearing on Wolf anthologies ever since.

Wolf continued to make his Chess sides in Memphis through 1953, and these songs are covered on disc 1 and the beginning of disc 2.  There is a lot of revisiting and reworking of older Delta blues songs and motifs, plus a move toward a faster, more rocking style. At Wolf’s first Chicago session, Chess single #1566 captures this transition with the slow grind of “No Place To Go (You Gonna Wreck My Life)” on one side and the shuffle-rocker “Rockin’ Daddy” on the other―just slightly slower than any contemporary Chuck Berry rock “n” roll side.

The second Chess session, in May 1954, paired Wolf for the first time with guitarist Hubert Sumlin and resulted in the classic “Evil (Is Goin’ On),” a song among the most ominous and menacing in the blues genre.  Disc 2 continues up into 1956 with the classic “Smokestack Lightning,” and another classic at least in title, “I Asked for Water (She Gave Me Gasoline).” After listening to disc 2, it’s instructive to go back to the beginning of disc 1, to hear how much Wolf’s music had changed and evolved between summer 1951 and summer 1956.

Following is a video of “Smokestack Lightning” from a 1964 live performance in England with Willie Dixon and Hubert Sumlin:

The set then gets less interesting. The last two discs could have been de-larded and combined to one excellent disc, but instead we hear every remaining scrap of out-takes, alternates takes, studio chatter, echo-chamber tests and the proverbial kitchen sink. This is all well and good for completists, accumulators and academics, but this is music meant to be enjoyed, and hearing a bunch of false starts and flubs is not enjoyable. Wolf’s Chess producers were wise about which takes were originally released, and the rest are best left in the can or donated to a blues museum or research library (one reviewer’s opinion . . .).

Despite the flab surrounding the gold, this set clearly shows that Wolf made more great tunes in the late 50s, including his version of “Sittin’ On Top of the World,” “Howlin’ For My Baby,” and “Mr. Airplane Man.”  Then we get to the last session in this set, from June 1960. Without any flubs or alternate takes, the set ends with three classics, “Wang-Dang Doodle,” “Back Door Man,” and “Spoonful.” These three songs are everything as big and loud and overpowering as the Wolf legend, and as Wolf the man was described by contemporaries.

Looking at the glass half-full, the 1960’s Chess recordings made by Wolf included more classics and treasures, almost all included on the previous 4-CD Chess Box set (which also includes the best parts of this collection).  The half-empty view is that there are undoubtedly many more feet of tape containing material best left in the can, and it will undoubtedly be included on any subsequent “complete” set(s).

Weighing in this set’s favor are good sound quality, nice packaging and excellent essays by Peter Guralnick and Dick Shurman. There is some additional discographical information vs. previous releases, and it’s all collected in a coherent timeline. If the set were just “masters” as claimed, it would be a knockout hit.