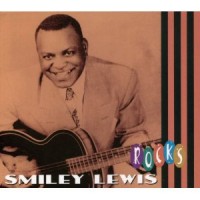 Smiley Lewis is known more for the famous covers of his songs (“I Hear You Knockin’” by Gale Storm, “Blue Monday” by Fats Domino, and “One Night” by Elvis Presley, to name a few) than he is for his own rocking versions. But even though the big hit always seemed to elude Lewis, this collection proves conclusively that he could rock just as hard as the rest of them. Though Bear Family has previously issued a four CD box set on Lewis’ career (Shame, Shame, Shame), this collection pulls together the 36 most rockin’ sides cut for Imperial Records between 1950-1958.

For those unfamiliar with the original versions of the hits, Lewis was a big man with a big voice; a New Orleans blues singer with a voice reminiscent of Big Joe Turner. This is upbeat, swinging jump blues at its best with blaring horns and the best of New Orleans session men (even including label mate Fats Domino on at least one session), and as the title suggests, it rocks. The CD is given the Bear Family treatment: extensive liner notes, discography, lots of photos, superior audio quality. If anyone has even a passing interest in jump blues, the roots of rock and roll, or New Orleans R&B, as well as a limited budget, one can do no finer than this single disc compilation.