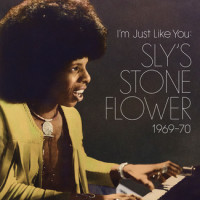 Label: Light in the Attic Records

One of the most iconic contrasts between two albums by a group in popular music may be the seemingly huge stylistic gulf between Sly and The Family Stone’s ebullient 1969 album Stand! and the darker themes and starker textures of their 1971 release There’s a Riot Goin’ On. This new compilation, I’m Just Like You: Sly’s Stone Flower 1969-1970, featuring bandleader Sly Stone’s work with other artists during these interim years released on his Stone Flower label, sheds some light onto his artistic development between these two albums as well as insight into the guidance that he provided others in his role as a composer and producer.

Fans of Sly and the Family Stone listening to this set of recordings may be surprised to find many songs that are perhaps most familiar to them from The Family Stone catalog.  A standout may be Sly’s demo version of “Just Like a Baby,” a bare bones arrangement of the song, complete with stark and repetitive programmed drum machines and a stripped-down texture that makes the song feel eerie at times.  Also included here are demo and full band recordings of “Somebody’s Watching You” (which appeared on Stand!) by Little Sister, a female vocal group (and sometimes backup vocalists for The Family Stone) led by Stone’s real-life little sister Vet Stewart.  What is particularly interesting about the numbers on this album that were recorded by the Family Stone and other artists is their adaptability—each cut in this collection features different arrangements of some of the group’s most influential and recognizable songs with different, often less flashy arrangements than appeared on Family Stone recordings.

“You’re the One,” another Little Sister number, is presented in both a demo and full band versions, featuring Sly’s minimalist arrangement and gospel-funk production.  Interestingly, much of the music on this collection feels like embryonic versions of Family Stone material, such as 6IX’s “I’m Just Like You” (again present in both drum-machine driven demo and full-band versions), which has many of the earmarks of the former group’s style, complete with Hammond organ, wah-wah guitar, and harmonica.  Joe Hick’s “Life and Death in G & A” contains what almost seem to be ominous pleas to “feel good,” foreshadowing the darker shades of There’s a Riot Going On, and the bleaker tone that characterizes the latter Family Stone release.  Perhaps in part due to his small stable of artists, or perhaps due to the degree of control that Sly maintained throughout the recording process, many of these recordings sound much more like Sly and the Family Stone records than groups distinct from Sly’s main ensemble; this may be read as a testament to the pervasiveness of Stone’s uncompromising artistic vision.

The amount of context that is provided in this set also sheds light onto the process and nature of the recordings included.  The multiple versions of several songs and an accompanying 27-page booklet full of insightful liner notes, including essays written about this period and an interview with Sly himself about his work during these years, provide a wealth of information for fans interested in exploring the process behind the creation of this particularly interesting material.  For any diehard Sly Stone fan, this is an excellent set that allows the listener to hear his musical transformation between Stand! and There’s a Riot Goin’ On.  While much of this material consists of demo recordings that are rough around the edges at times, the raw power of the ideas present in these songs will keep listeners returning again and again.