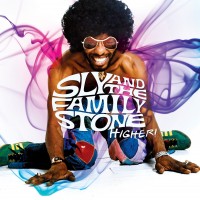 Artist: Sly and the Family Stone

Six years ago Legacy celebrated the 40th anniversary of Sly’s signing to Epic Records by finally reissuing digitally remastered and expanded editions of Sly & The Family Stone’s seven albums (also issued together in The Collection box set). Two years later they released The Woodstock Experience featuring the band’s full festival performance. Now they’ve combed the vault for yet another set which should please fans.

Thankfully, the 77 tracks on Higher! don’t entirely duplicate these previous sets. Though the band’s classic hits from each album are included in stereo, the remainder of the set is filled with mono single mixes, live recordings from the band’s performances at the 1970 Isle of Wight Festival, and studio outtakes and instrumentals including 17 previously unreleased tracks (with 6 more included on the Amazon exclusive set). Fans will also be happy to note that “Hot Fun in the Summertime,” “Everybody is a Star,” and “Thank You (Falettinme Be Mice Elf Agin),” which were omitted from The Collection, are included as well.

Among the most interesting tracks are the gems from Sly’s pre-Family Stone period, including his 1964 singles on the Autumn Records label—“I Just Learned How to Swim,” “Scat Swim,” and “Buttermilk (part one),” featuring Sly on vocals, organ, guitar and bass. After Sly left Autumn he formed the Family Stone and the band recorded their first studio demo, “I Ain’t Go Nobody (For Real)” and the flip side “I Can’t Turn You Loose,” which are also included (both were previously issued on Loadstone and later by Ace Records).  The experimental studio outtakes scattered throughout the set are equally fascinating and much more revelatory than the usual alternate takes, shedding light on the creative process. Sly and the band dabble in jazz, gospel, R&B, funk, rock and country while experimenting with different backing tracks.

One of the best features of the set is the 104-page 10×10 book with an introduction by Sly biographer Jeff Kaliss and hundreds of fabulous full-color photos. The extensive track by track details by Edwin and Arno Konings feature quotes from various musicians along with images of the original labels and a band timeline (some of which is apparently excerpted from their forthcoming biography of the band). This book alone makes the set a worthwhile purchase.