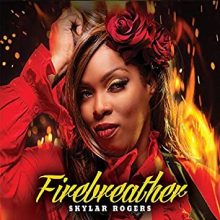 With a sound that draws comparisons to Etta James and Koko Taylor, Chicago-born vocalist Skylar Rogers is a relatively new force on the blues scene. After the success of her debut EP, she began touring nationally in 2019 and dropped her first single last year. Now Rogers tears into her first full-length album, Firebreather, with a powerful blast of energy that fuels her unique blend of “soul rockin’ blues.”

Kicking off with “Hard Headed Woman,” Rogers reveals her fiercely independent nature that yields to no man, not even Hill and his searing lead guitar. “Back to Memphis” gives a nod to the blues city, while “Work” emphasizes the tightly knit ensemble as the band weaves through funky organ riffs. The funk continues on the title track, “Firebreather,” as Rogers threatens to unleash her wrath on the man who deceived her.

Though most of the songs on the album are high energy blues rockers, Rogers is even more convincing on the slow burners, where her powerful gospel inflected vocals are allowed to dominate. On “Failure,” she draws upon the dual demons of depression and low self-esteem, a result of life in Chicago’s toughest neighborhoods and a period of homelessness following a divorce. Perhaps the most gut wrenching blues song on the album, “Drowning” finds Rogers overwhelmed by “memories of something that was never meant to be.” Another highlight is “Thankful,” a blues hymn showcasing the full range and depth of Rogers’ voice with Zimmer’s Hammond B3 heightening the religious overtones.

Concluding with the upbeat “Insecurities,” Rogers extends a positive message about conquering fears and learning to love yourself despite all obstacles. If Firebreather is about facing your demons and coming out on top, then Skylar Rogers and the Blue Diamonds have definitely succeeded through sheer raw power and painfully honest, soul searching songs.