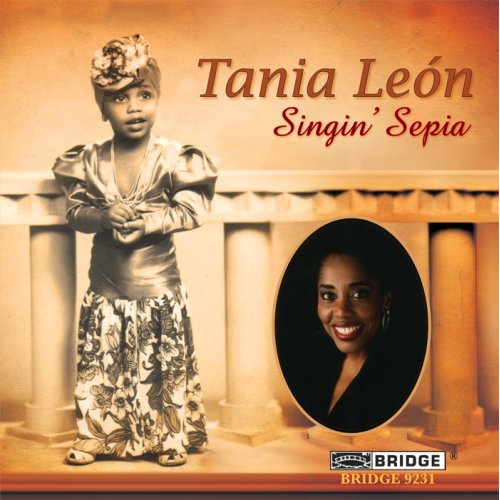 If one had to use a single word word to describe Tania León’s music it would have to be “movement”: movement found in the tempo and rhythmic figures, movement between musical lines, and movement between contrasting timbres and textures. Movement is a salient feature in the works presented in Singin’ Sepia, an accurate representation of León’s compositional style and pallet. As a young musician in Cuba, León listened to traditional and popular dance music, and collaborated with popular music and jazz performers and composers such as Paquito D’Rivera. After moving to New York City she started her professional career in the U.S., working with dance companies and co-founding the Dance Theater of Harlem. Thus it comes as no surprise that movement is such an important feature in her works.

One should not, however, expect to hear replicas of Cuban clave and guguanco patterns, or quotes of jazz and soul melodies in León’s music. León extracts the essence from these musical traditions and uses this essence as part of her compositional pallet, which includes atonality, pointillist techniques, interlocking rhythms, ostinati, extended instrumental and vocal techniques, and electro-acoustic elements. León mixes the familiar with the unfamiliar, meeting and exceeding the listener’s expectations. Due to the variety of compositional techniques and styles León’s music defies categorization, and she would not have it any other way. As mentioned by Jason Stanyek in the accompanying liner notes, “avoiding reductive categorizations has become León’s trademark.” Her stance on categories and labels extends from her works to her personal life and background, refusing to be labeled Afro-Cuban, Cuban-American, or any other hyphenated term. In León’s words, she is a citizen of the world, and she is inspired by diverse musical cultures.

León’s works are also the result of the dialogue between composer and performer. Most were commissioned by a performer or an ensemble, so León created these works with specific performers in mind. In fact, three of the six pieces recorded for this album were recorded by the artists who commissioned them (“Bailarín,” “Singin’ Sepia,” and “Axon”). Her style appeals to performers of new music from diverse backgrounds, such as David Starobin (guitarist and executive producer of Bridge Records), Tony Arnold (soprano), and Mari Kimura (electro-acoustic music composer and violinist).

The title work of the album, Singin’ Sepia, also shows León’s penchant for working with texts by contemporary poets, in this case Rita Dove. The work is a set of five songs for soprano, violin, clarinet and four-hand piano. León’s writing for each instrument (including the voice) consists of both idiomatic and extended techniques, producing five virtuosic parts that need to be perfectly synchronized in order to convey the contrasts between stillness and movement, and the interlocking rhythmic figures that create subtle, evanescent moments of groove. The performance offered in the album goes beyond presenting and achieving these moments, and delivers a nuanced and emotional rendition of León’s work.

Those of us familiar with León’s compositions will also find delight in her use of pre-recorded materials in “Axon,” for violin and interactive computer. In this work she quotes sections from “Batey” and “A la par” to construct the soundtrack with which violinist Mari Kimura (who commissioned the work) interacts.

Singin’ Sepia shows León’s flexibility and ability to compose for a variety of performing forces, ensembles and combination of instruments (“Horizons” was written for a full orchestra, while “Satiné” was written for two pianists), therefore the listener should not expect continuity in performing forces from piece to piece. The album is a sample of León’s style, which would be difficult to present in concert to a live audience. However, the idea of movement, whether it is actual movement, its anticipation or interruption, cuts across all of the works presented in the album, and every piece is characterized by her ample use of a wide variety of musical styles and compositional techniques.