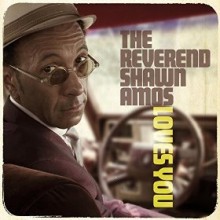 The Reverend Shawn Amos, a self-proclaimed blues preacher, is on a mission to spread his “secular gospel” to all, proselytizing “to continue, extend and spread the tradition of the blues with unsurpassed fervor.” His epiphany came after reading Peter Guralnick’s Feel Like Going Home trilogy, and soon after the “born again” film school student was devoted to playing the blues. Amos then spent a couple of decades in the music business as an A&R executive, following in the footsteps of his father, Wally Amos, the first African American talent agent for the William Morris Agency (though he’s better known for his Famous Amos chocolate chip cookie empire). More recently, Shawn founded the digital media company Freshwire, but he’s also found time to release a few of his own albums along the way. His latest project, The Reverend Shawn Amos Loves You, is his second blues album and features ten original songs penned by Amos plus two covers. Following is the album trailer:

In order to inject a bit of Southern flavor, Amos chose to record in Shreveport, Louisiana at the studio of Brady Blade, who’s featured on drums and percussion, along with other locals including Chris “Doctor” Roberts on electric guitar, Chris Thomas on bass, Hassell Teekell on B3, Lewis Smith on trumpet, and the gospel ensemble Forever Jones on backing vocals. Joining this ensemble from the West Coast is Mindi Abair on sax, Anthony Marinelli on keyboards, and of course Amos on vocals and harmonica. If you recognize any of these names you’ll no doubt realize there’s a very high level of musicianship involved, built on a strong foundation of jazz and R&B, which allows for lots of twists and turns throughout.

On the introductory track, “Days of Depression,” Amos pulls out all the stops. Channeling the pre-war blues, the song grinds forward in the manner of a work song, reinforced by The Blind Boys of Alabama who make a guest appearance on backup vocals. Jumping forward a few decades, “Brand New Man” marries a funky R&B horn section with hard rocking guitars. By the third track, “Boogie,” the album settles more firmly into contemporary blues, punctuated by Amos’ wailing harp with vocalist Missy Andersen as the featured guest. The mood switches up again on “Will You Be Mine,” a grooving, reverb soaked song that’s more roots rock than blues, and one of the best tracks on the album. Other highlights include “You’re Gonna Miss Me (When I Get Home)” and the Jimmy Reed cover “Bright Lights, Big City” (or “The Hollywood Blues”) that features a wailing sax solo by Abair. Amos takes us to church on the closing song, “The Last Days I’m Loving You,” with prominence given to the Hammond B3 and Forever Jones, fading out through the refrain “you taught me one thing I need to learn, this is the last day I’m loving you.”

On The Reverend Shawn Amos Loves You, the good Rev proves he’s no jack-leg blues preacher, but the real deal – well-schooled in both traditional and contemporary styles. With engaging songs, soulful back-up singers, and a honking R&B horn section, he delivers a blues sermon about love and life lessons that will lift your spirits and empower your body to get down and groove to the music.