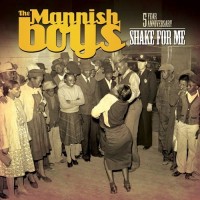 Title:  Shake For Me

Delta Groove Music has recently released its fifth studio album by The Mannish Boys. Shortly after Randy Chortkoff founded the label in 2004, he pulled together a group of musicians for the purpose of reviving some of the lesser-known blues hits of the past. Although the main band members have shifted some since their last album (Jimi Botts has replaced Richared Ines on drums and Willie J. Campbell has replaced Tom Leavy and Ronnie James Weber on electric and upright bass), the core group has remained the same. Long-time members Finis Tasby (vocals), Kirk Fletcher (guitar), Frank Goldwasser (guitar/vocals), and Chortkoff himself (lead/harmonica) are joined once again by vocalist Bobby Jones, pianist Fred Kaplan, and wind player David “Woody” Woodford along with approximately a dozen guest artists.

Perhaps because of its huge pool of guest artists, the band covers a range of sounds and genres over the course of this sixteen-track release. Although they offer up plenty of lowdown blues numbers with a California twist, they mix in some rock ’n’ roll and big band style numbers as well. For instance, the album opens with “Too Tired”–a number that combines Chuck Berry style riffs by guitarist Nick Curran with a big band sound multi-tracked by David “Woody” Woodruff and Lee Thornburg. Another example is a medley of Bo Diddley’s “Mona” and Johnny Otis’ “Willie and the Hand Jive.” The group does a great job of capturing the Bo Diddley beat throughout both tunes, albeit at a faster clip and with a more elaborate guitar line than Diddley’s version.

Other highlights on the album include “Educated Ways,” which stands out for its interesting mix of blues piano and vocals over a slide guitar line by Frank Goldwasser and a bari sax rhythm line by Woodford. The timbre combination alone is enough to make this song worth a second listen. “Half Ain’t Been Told” features a duet by Jones and pianist Rob Rio. Rio’s performance is fairly faithful to the Otis Spann version, although Jones signing style is harsher than Spann’s mellow laidback delivery, giving the song more of an edge.

“Bullet” is a blues instrumental featuring solos by Kirk Fletcher, Nick Curran, Fred Kaplan, and Jimi Bott.  Although one can’t find fault with Fletcher’s performance, Curran’s livelier style and quick rock ’n’ roll riffs steal the show.  Curran’s past performances have run the gamut from rockabilly with Ronnie Dawson, punk with Deguello, and rock ‘n’ roll with his own band, The Lowlifes.

For harmonica lovers, there are a number of fine solos, including performances by Chortkoff, Rod Piazza, Lynwood Slim, Mitch Kashmar, and “Big” Pete van der Pluijm. Van der Pluijm is currently big on the Dutch blues circuit and is sometimes hailed as one of the Netherland’s best kept secrets. In addition to the harmonica, he’s perfectly capable of belting out Lester Butler’s “Way Down South.”

All in all, the Mannish Boys have stuck true to their mission of performing “some of the greatest music from the blues canon without lapsing into clichés and dead-horse beating.” I suspect for diehard blues fans some of the numbers will be a bit too close to earlier versions to warrant repeated listening. For more casual blues listeners, however, Shake for Me promises to make a great addition to your collection.