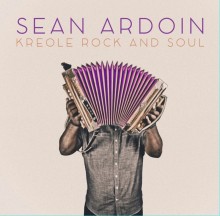 Sean Ardoin may come from a long line of accordion-playing Creole musicians (including Amédé Ardoin and Alphonse “Bois Sec” Ardoin), but he certainly isn’t one to be put in a box when it comes to his music. Ardoin’s newest album, Kreole Rock and Soul, is named after the genre that he created in an attempt to revamp the music of his ancestors. While the album pays tribute to Ardoin’s Creole roots, it also incorporates the styles of contemporary pop and classic rock.

As with any good Creole song, the tracks on Kreole Rock and Soul feature traditional Creole rhythms and instruments like the accordion and washboard. Beyond their shared foundation in tradition, the songs range in style from R&B ballads such as “Butterfly” to the Southern rock-inspired “Kick Rocks.”  As the opening track, “Kick Rocks” introduces listeners to the genre of Kreole rock and soul through the mixing of Ardoin’s signature accordion with fresh songwriting and a catchy chorus. “Butterfly,” a slower song written as a tribute to Ardoin’s wife, blends the style of the traditional Creole slow dance called ‘buckle shining’ with modern R&B influences.

Ardoin’s transformation of Creole and zydeco music has garnered attention far beyond his home state of Louisiana, through appearances on programs from MTV, BET, and Bravo TV, just to name a few. Here’s a recent live performance at French Quarter Fest 2018:

Through his newest album, Sean Ardoin is no doubt accomplishing his mission of bringing Louisiana and its Creole musical traditions to listeners around the country and beyond.