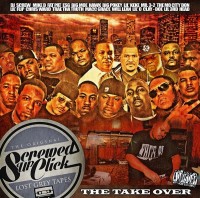 For those who are unfamiliar, The Screwed Up Click is the collective of rap artists and associates that formed around the late DJ Screw (1971-2000), the originator of the screwed and chopped DJ/production style. Since the early 1990s, the crew has released several small group and solo records along with appearing on the countless DJ Screw mixtapes. Members and fans, however, have long clamored for the crew to collaborate on a studio album of new material. The Takeover is just that.

Before its release, The Takeover had become Houston’s version of Detox. Promotions for the album began to surface in mid-2000s as the city’s rap scene was enjoying unprecedented national attention. A picture of a promo van featuring an image of the album cover along with the words “coming Summer 2005” circulated around the internet, furthering the buzz for the release. In the proceeding years, the idea of The Takeover was kept alive through interviews, message board chatter, and tweets. A series of unfulfilled release dates eventually tempered excitement as fans questioned whether the album would ever see the light of day. The official release of “Keeping it Gangsta,” the albums lead single, in late 2013 helped renew enthusiasm. Straight Profit Records, known for releasing several SUC related albums in 1990s and 2000s, finally dropped the album on March 25, 2014. 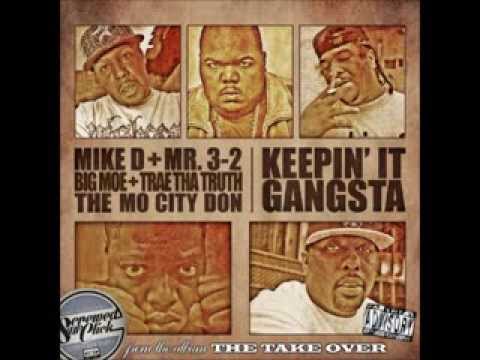 The album finds the Screwed up Click at their vocal finest. The myriad of styles mesh perfectly, bringing the magic of the Screwtape to this studio recording. The highlights are too numerous to name. On “Keeping It Gangsta” Mr. 3-2, Mike D and a Guerilla Maab-ish Z-Ro and Trae eviscerate a mid-tempo beat. “I Don’t Feel Ya“ is probably the most polished song on the album and features Lil O, H.A.W.K. and Bun B spitting Texas-bred battle raps over Mr. Lee’s southern-fried beat. Mike D, E.S.G, Mr. 3-2, Lil O, and Z-Ro shine on the closing posse cut “The Takeover.”

H.A.W.K.’s “SUC Soldiers” is the most special moment of album. Prior to his untimely death in 2006, H.A.W.K., known as the 5 Star General of the Click, filled the void left by DJ Screw, becoming the glue that held the sometimes-splintered crew together. H.A.W.K pulls no punches as he cements membership and charges them with carrying the Screw legacy forward. “S.U.C. Soldiers” is a point of re-dedication, a reminder of the past, statement of the present, and suggestions for the future of the Screwed Up Click.

Because it was recorded nearly a decade ago, the album naturally sounds dated at times. This may be a turn-off for some listeners, but fans of the Screwed Up Click should see this as a plus. The Takeover is a snapshot of the Screwed Up Click post-DJ Screw and prior to the untimely deaths of original members H.A.W.K and Big Moe. We will never see this assemblage again. For this reason alone, The Takeover is a must buy for Screw-heads and those interested into Screw culture.