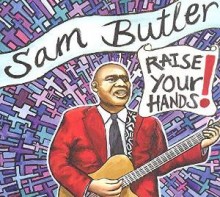 Producer Brian Brinkerhoff thought of the latter when he contacted guitarist and singer Sam Butler about doing an album together. Butler—known for his work with the Blind Boys of Alabama and Clarence Fountain—liked the proposal. The two hired a talented trio of musicians—pedal steel guitarist Roosevelt Collier, drummer Marco Giovino, and bassist Viktor Krauss—and selected songs by U2, Eric Clapton, and Van Morrison, to name a few, to record. Over three days—which Brinkerhoff called a “musical worship service”—Raise Your Hands! was born.

Musically, the album moves between blues-rock grooves and songs of reflective contemplation. Tom Waits’ “Gospel Train” is a swampy invocation to join the Lord’s ride and evade the Devil’s foolishness. “Heaven’s Wall” has a similar heaviness, laid over an extended vamp. On the other hand, “Sanctuary” is a reverb-soaked ballad, with an earthy, Americana sound. Between these two poles, Butler’s dynamic voice, passionate interpretation, and praise for the Lord are the album’s common threads.

While Butler is the centerpiece of Raise Your Hands!, pedal steel guitarist Roosevelt Collier is the star. Collier was raised in the House of God Congregation—known for producing many talented pedal steel musicians. Collier’s solos on “Magnificent” and “Lead Me Father” are bold, soaring statements, while his sensitive accompaniment on the album’s slower songs is ever-tasteful. Drummer Marco Giovino, too, shines on Curtis Mayfield’s “Wherever You Leadth” and Victor Krauss is consistent throughout the release.

Raise Your Hands! is an album that blurs musical lines. Sacred and secular, rock and gospel, bandleader and band member are productively eschewed, in service of the Lord and His gift of good music.