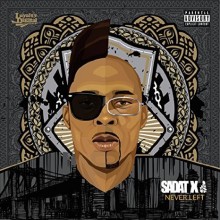 Before diving into Sadat X‘s latest solo release, I had the pleasure of catching Brand Nubian perform at the Howard Theater in DC.  Sadat X, Grand Puba, and Lord Jamar delivered enthusiasm and vigor seen among few artists 20-plus years into their careers.  That enthusiasm for rapping is also readily apparent on Never Left.

Much of the album is an homage to New York, illustrated by recollections of crossing paths with NYC hip hop royalty (Biggies, Jay-Z, Nas), and rhyming “finagle” with “bagel” on the opening cut, “We In New York”:

The other central theme of Never Left, also illustrated by the aforementioned interludes, is the introspection born of a long career. “What Up Kid” repurposes the opening phrase from Nas’ “One Love” to impart words of wisdom to the youth, which comes across as more overbearing father than wise uncle. But any lyrical shortcomings can be forgiven by the kind of energy put forth on “On Fire,” featuring a verse from fellow NYC vet Cormega and Lanelle Tyler:

With the exception of “Put It On Me,” which experiments with a reggae beat, the production on Never Left is lush, modern boom bap right in Sadat’s comfort zone. And that’s what makes Never Left work: Sadat X has been around long enough to know what his fans want, and he delivers on that without compromising for the sake of novelty. But most importantly, it is clear he still loves what he does.