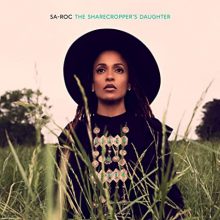 As the musical tide shifts and conscious rap is once again foregrounded, The Sharecropper’s Daughter by Sa-Roc is an album that should be canonized. Lyrically dexterous, this album is Ancestral remembrance, community healing, and a call to check internalized systems of oppression, packaged in fifteen phenomenal tracks. From the opening track “EmergencE” stating, “to heal the spirit, reveal the prison,” to the closing track “Grounded” that provides the reminder, “I got too much in me for you to take it from me, that’s how I learned to be free,” The Sharecropper’s Daughter leaves you feeling both affirmed and called to action.

The albums title, and the title track, pay tribute to Sa-Roc’s father who grew up sharecropping tobacco. This mixture of personal and communal in her hard-hitting lyrics helps frame one of the main points of the project, which is agency through the overcoming of inherited generational trauma. A perfect example of this is “Forever,” which has 4.4 million views on YouTube. In one of the song’s most poignant bars she raps: “I was 14 years old forcing pills down my throat so my baby fat diminished / Still got the scars from cutting my wrists when I thought that life was finished / Now they remind me what my lows look like now that I know the sky’s the limit, ok.” These lyrics hit so hard because they speak to two of the many taboo topics within the Black community: mental health and self-harm. Sa-Roc isn’t afraid to go to the difficult intersection points and tell the story that needs to be told, so that others can see themselves, and by extension realize that healing is possible. Additionally, “Forever” serves as a continual affirmation—though change and growth are constant, societal pressures shouldn’t cause you to change in ways that make you lose yourself.

“Rocwell’s America” paints a picture of the grim reality for many African Americans in America’s cities. With each line providing a new point of social commentary, this track asks listeners to pause and consider what happens when the “government feeding us bulls*** ‘stead of truth, giving birth to a dishonest nation, we call it fertile lies.” Despite the bleak reality expressed by these lyrics, the closing of the song reminds us to remain present and active in the fight for a better future because, “we gotta be wise for these Black kids.”

The Sharecropper’s Daughter is an album that will be played, re-played, and examined as the subject of articles and dissertations in years to come. Sa-Roc is being held in conversations with other great lyricists of generations past, as she should. Nevertheless, it should be noted that she also stands in a league of her own as she reminds her listeners on the title track, “they forgot that we were seeds,” and as such, we have a responsibility to bloom regardless of where and how we were planted.