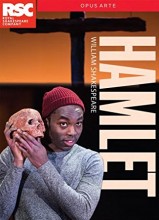 What could be better for Black History Month than a new production of Shakespeare’s Hamlet featuring a Black cast? The answer is a production supported by Black musicians. This recently released DVD from the Royal Shakespeare Company captures the first performance of this new production, live from Stratford-Upon-Avon on March 12, 2016.  Directed by Simon Godwin, the cast features British-Ghanaian actor Paapa Essiedu in the starring role—the first black actor to ever play Hamlet in the history of the RSC.

Chief composer for this production is none other than Sola Akingbola, longtime percussionist for the British funk and acid jazz band Jamiroquai, who leads the musical ensemble on vocals and percussion. He is joined by Bruce O’Neil, the RSC’s Head of Music, who performs on keyboards, as well as Joe Archer on guitar and on keyboards; Dirk Campbell on woodwinds, nyatiti, and percussion; and Sidiki Dembélè and James Jones also contributing to the percussion ensemble. With the shift to a Black cast, Godwin also shifted the geographic focus of the play from Denmark to Africa, and Akingbola’s score perfectly encapsulates the action.

If you missed the live stream of the performance last summer, the DVD version is highly recommended. Teachers will find a wealth of information and classroom tools on the RSC website for the production.