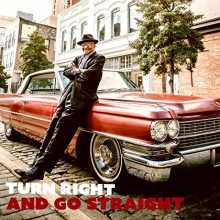 Born in 1928, singer-songwriter Roscoe Robinson recently cut two new tracks in celebration of his 90th birthday. The longtime resident of Birmingham, Alabama, has performed with several significant gospel groups, including the Highway QC’s back when Sam Cooke was a member, as well as the Blind Boys of Alabama and the Blind Boys of Mississippi. Like Cooke, Robinson also crossed over into secular music, gaining recognition as a soul singer in the 1960s with several charting hits, and later releasing recordings on the Atlantic, Fame, Paula, and Sound Stage 7 labels.

Given Robinson’s dual background as a gospel and soul singer, it’s only fitting that his new single gives a nod to both genres. As one would expect from the title, “Turn Right and Go Straight,” written by Hi Records founder Quinton Claunch, reflects Robinson’s gospel roots but has a distinctly blues-based accompaniment. On the “B” side, “We Got a Good Thing Goin’” is pure soul, and not just in the delivery. Bobby Patterson and Jerry Strickland, who co-wrote and produced many songs for the Jewel and Paula family of record labels, penned this song. As a result, Robinson’s 90th birthday tribute keeps alive not just his own gospel and Southern soul roots, but also brings to light the legacy of these other singer-songwriters and elder statesmen of the record industry.