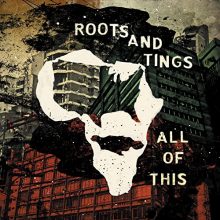 Combining elements of dancehall, reggae, soul and hip-hop in a subversive genre that they call Revolutionary Culture Music, Roots And Tings is a new project of Lateef the Truth Speaker (Blackalicious, Lytrix, Quannum), acclaimed DJ-producer Jah Yzer, and multi-talented musician Winstrong. Speaking about their new project, Winstrong describes Roots and Tings as “a community of curious souls with a generous goal to engage with each other through the stories told.”

The three Bay Area artists had known each other for more than ten years before coming together to collaborate on music that reflects the roots of and relationship between reggae and hip-hop. Their debut album, All of This, features 13 island-tinged tracks including the standout lead single “Class War,” with provocative lyrics about the 1%. The title track, which features Vursatyl (of Lifesavas), is a soulful love song with chill dancehall riddims.

The music of Roots and Tings draws deeply and respectfully from reggae and hip-hop to craft a new sound that offers fresh ideas and interpretations. In addition to their new EP, the group also just dropped a timely double single, “Election Time” and the Headnodic Remix “Election Time” (ft. Rico Pabon) that speaks to “phony political promises, the broken, intrinsically racist, sexist, classist and, in this time, a lying administration that is increasingly, dangerously authoritarian.” Definitely a group to watch!