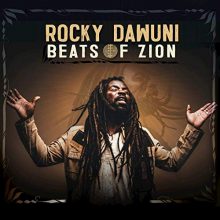 Named one of CNN’s Top 10 Global Stars from Africa and a GRAMMY nominee for “Best Reggae Album” in 2016, Ghanaian artist Rocky Dawuni is the real deal. Rocky is more than a musician, however; his eloquence and passion for activism have led to his designation as a UN Goodwill Ambassador for Africa and a global spokesperson on various causes. It is the experiences he gained while traveling as an ambassador that have helped shape his highly anticipated seventh studio album, Beats of Zion.

According to Rocky, this 13-track album “is inspired by a vision of the drumbeat of awareness and elevation of consciousness; a musical call to arms for my audience to be… an active instrument for positive change.” Songs like “Kyenkyen Bi Adi Mawu” and “Wickedest Sound,” which features Ghanaian dancehall star Stonebwoy, build on Rocky’s “Afro Roots” sound by incorporating influences from the Ghanaian music scene. Despite the strong lyrical messages in Beats of Zion, the album also includes its fair share of feel good anthems like the pop-inspired “Let’s Go” and the optimistic “Sunshine Day.”

Rocky Dawuni’s seventh studio album manages to retain the reggae sound that made him famous and pay homage to Ghanaian culture while promoting the messages of global unity and oneness that he has so passionately advocated for. As Ziggy Marley said, “Rocky’s music is creative inspiration that knows no boundaries.”