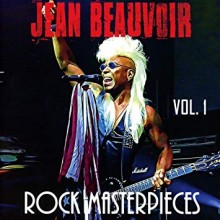 Jean Beauvoir is a legend in the world of black rock and Afro-punk artists. Born in Chicago to Haitian-American parents, he started his musical career in a fairly typical manner, learning drums and bass as a kid, and honing his vocals singing doo-wop. But his career took a dramatic left turn when he moved to New York during the punk rock explosion and crossed paths with Rod Swenson and Wendy O. Williams. They invited Beauvoir to become the bass player for the Plasmatics, one of the most infamous punk bands of all time, where he cultivated his instantly recognizable persona and blond Mohawk. He left the Plasmatics in 1981 after their third album, and went on to perform with many other legendary bands, including the Ramones.

Rock Masterpieces Vol. 1, the first part of a planned two volume set, draws from Beauvoir’s solo work as well as songs recorded with his own bands. The majority come from the discography of Beauvoir’s popular heavy metal band, Crown of Thorns (with Micki Free, Michael Paige, and Tony Thompson).  The band’s 1993 eponymous debut album is represented through five tracks including “Crown of Thorns,” “Dying for Love,” “Secret Jesus,” and the stand-out “Hike It Up.”  Beauvoir’s most recent single, “Standing on the Corner for Ya,” was originally featured on this album as well. A few songs are also drawn from the Crown of Thorns albums Breakthrough (1996), Lost Cathedral (1998), and Faith (2008), including the lead single “Rock Ready.”

The short-lived band Voodoo X, formed by Beauvoir with musicians from Berlin and New York, may have only produced one album, Vol. 1: The Awakening (1989), but they hit gold with two songs. The title track, “The Awakening,” was featured on the soundtrack of Wes Craven’s film Shocker.  “Voodoo Queen” was allegedly filmed during an actual live ritual officiated by Beauvoir’s uncle, a renowned Voodoo priest and subject of another Wes Craven film, The Serpent and the Rainbow.

Beauvoir’s solo career is only represented by two tracks from his 1986 debut album, Drums Along the Mohawk, remembered primarily for “Feel the Heat,” the leading track for Sylvester Stallone’s film Cobra.

If you don’t already own the albums cited above (we do!), Rock Masterpieces Vol. 1 is a fine introduction to the work of Jean Beauvoir, a very important musician, composer, and true ‘Icon of Rock.’