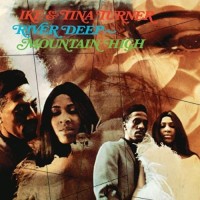 This 1966 album represents a smash-up of cultures and styles: pop overlord Phil Spector putting soul goddess Tina Turner behind his Wall of Sound, and paying husband Ike a reported $20,000 to stay away from the studio.  The result didn’t move the meter much in the U.S. but the title track was a big hit in Europe and the album gained something of a cult status in its country of birth.

Now Hip-O Select, Universal Music Group’s limited-edition reissue label, has gone back to the master tapes and reissued this album with its original A&M Records cover art and song sequence, plus a new booklet essay by Tony Hall.

For all the hype of Phil Spector producing Tina Turner, half of the songs were produced by Ike Turner, with very different sonic results.  So the album is half a dreamy soul-pop trip and half of it is the kind of hard-edged soul fare more typical from the Turners in the mid-1960s. Indeed, the Ike Turner tunes sound just fine, sitting proudly amid the Spector mini-dramas.

Focusing on the Spector productions, the title track (written by Spector, Jeff Barry and Ellie Greenwich) is a truly great song, and it’s been covered numerous times (do a Google or Wikipedia search on it).  By 1966, Spector’s Wall was really a swamp, layers of echo-laden instruments, percussion and background singers.  Above this swamp floats Tina Turner’s gorgeous voice, and she was at home with the Brill Building material she was given.  It’s truly the sound of a singer stretching out and not finding her limits.  She easily tackles Holland-Dozier-Holland’s “A Love Yours (Don’t Come Knocking Every Day),” originally recorded three years earlier by Martha and the Vandellas.  And she scales the Wall again for two more Barry-Greenwich songs, plus a cover of Doc Pomus’s “Save the Last Dance for Me.”

The Ike Turner tunes are more straight-forward, designed to highlight Tina’s seething sexuality and grit. They are interspersed with the Spector tunes, giving the album kind of a yin-and-yang feeling but also keeping it rooted firmly in the genre of soul. The fact that Tina can credibly deliver for both producers makes her the album’s true victor.

The disappointing sales of the original album were enough to cause Spector to retreat from the music business for a few years, and several authors have cited that period as the beginning of his personality breakdown that eventually led to his recent murder conviction.  As for the Turners, later revelations about Ike’s brutal behavior were far off on the horizon, and in their near future was a tour of the U.S. in 1969 as the Rolling Stones’ opening act, and many more hit records.

Although River Deep, Mountain High stands as a time capsule, a sharp cutoff between early ‘60s pop and the harder funk music that was starting to sprout in urban music clubs, the album still makes for good listening today. The excellent remastering by Mark Omann highlights the differences in sound and setting that Phil Spector and Ike Turner envisioned for their soul queen.