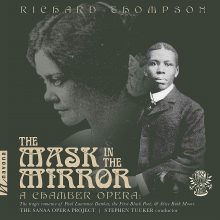 The Mask in the Mirror, a three-act chamber opera from composer and pianist Richard Thompson, portrays turmoil and tragedy in this dramatization of the courtship and marriage of renowned African-American poet Paul Laurence Dunbar (1872-1906) and author Alice Ruth Moore (1875-1935). Conducted by Stephen Tucker, The Sanaa Opera Project released a recording of The Mask in the Mirror earlier this year. Featuring tenor Cameo Humes in the role of Paul and soprano Angela Owens as Alice, with mezzo-soprano Lindsay Patterson Abdou in several supporting familial roles, The Mask in the Mirror balances man against woman, jazz against classical composition, and society against self in a rise of tension that resolves only with end of their relationship and Paul’s subsequent surrender to tuberculosis.

Thompson’s music has incorporated both jazz and classical styles throughout his career. His 2006 release, Poetry Preludes, included song cycles of poetry from both Langston Hughes and Paul Laurence Dunbar. The Mask in the Mirror displays a natural progression from these elements, with an ease of shifts in musical language throughout the opera. Thompson discusses the project in the following interview:

Sung in English and drawn from letters exchanged between Paul and Alice around the turn of the twentieth century, as well as Paul’s poetry, The Mask in the Mirror features sparse orchestration that at times veers heavily towards jazz idioms, such as swung drum kit or ragtime piano riffs. Often alternating between spoken and sung lines, Paul and Alice struggle with a relationship suffering from the influence of racism, literary achievement and criticism, as well as Paul’s alcoholism, infidelities, and abuse.

Especially impactful and unexpected is a scene in which a fight over Paul’s drinking turns into a sexual assault. Humes and Owens carry off this highly emotional end to the second act with the intensity required by the moment. The third act plays out the end of the relationship between Paul and Alice, ending with their inevitable separation.

Throughout, tensions of identity—assigned by both society and themselves—hound both Paul, who sings, “they’d rather see the mask than the human face below,” and Alice, who refuses to work under a woman with darker skin than her own. Often uncomfortable, the opera does not shy away from the realities of a relationship rooted in abuse and the accompanying struggle of Paul and Alice’s expectations of love, literary success, and racial identities.