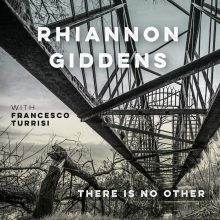 there is no Other is the third solo studio album from former Carolina Chocolate Drops member, Rhiannon Giddens, following Tomorrow is My Turn (2015) and Freedom Highway (2017). This new release is also her first formal collaboration with Italian multi-instrumentalist Francesco Turrisi. Both Giddens and Turrisi share similar musical passions rooted in a desire to unearth hidden or underexplored roots of certain styles of music. For Rhiannon, her interests lie with African American influences on folk or Americana music, while Turrisi focuses on the Mediterranean (Middle Eastern and North African) influences on the music of Southern Europe.

“It’s all about movement, for both of us,” says Giddens. “Everything that both of us talk about is about movements of human beings and how we affect each other. If you just look at our range of instruments, where they’ve come from and how they’ve traveled across the world, it’s pretty amazing. Francesco and I connect: we find ourselves talking about the same things, but across the Atlantic Ocean!” This concept of movement is expressed on the track, “I’m On My Way,” with the chorus, “I don’t know where I’m going / But I’m on my way / Lord if you love me / Keep me I pray.”

Turrisi also speaks to the ease of combining interests in collaboration for this project: “In my head I had this idea of trying to combine some of my Mediterranean sound with some of the stuff that Rhiannon was doing,” Turrisi says. “Let’s call it early African-American music. I thought that it would be interesting to use an Arabic frame drum with the type of banjo sound that she has, which to me sounds very much connected to Africa.”

Speaking to the title of the album, Giddens says the following: “Othering people is something that humans have done for ever, but when it got wrapped up in the economic explosion that happened in the 1700s and 1800s, then it becomes very economically important for people to stay othered, so they could still be exploited. And of course it’s so politically important because the more that we come together, the more that we realize that we outnumber the folks who are trying to run the world and keep everything for themselves.”

She continues by discussing the often unexplored connection between the Islamic world, Africa, and the United States: “I’m discovering so much about how invisible, othered and dismissed the Islamic world is, in terms of the massive effects it had on European music and culture…For example, the massive impact it had on the African continent, the number of Muslim enslaved people there were in the Americas: way more than people think. It’s a really huge topic and we’re barely scratching the surface. But even having some of the rhythms and modes that Francesco has been working on through his music for so long match up so well. The way that both of us approach music is very similar because we’re both very educated about where the music is coming from. But when it comes to playing, we’re both just playing what we feel.”

This blend of European, Middle Eastern, Northern African, and African American influences is seen throughout the album in the instrumentation: Giddens can be heard on vocals in addition to minstrel banjo, octave violin, and viola. Turrisi plays piano, accordion, frame drum, tamburello, lute, cello banjo, daf, and colascione. Although these blends of styles and cultures are certainly heard in the entirety of the album, I was especially struck by Giddens and Turrisi’s collaboration on “Briggs’ Forró.” This song represents a reimagining of a banjo tune from Thomas Briggs—a white musician who visited slave plantations and copied down melodies he heard in the slave quarters. While Rhiannon plays the banjo and provides some subtle vocals, Turrisi is heard on the accordion and tamburello creating a complimentary merger of styles.

there is no Other at once condemns the glorification of Eurocentric and Americentric notions of purity and tendencies to “other” difference, while celebrating the diasporic spread of musical styles, cultures, and customs.