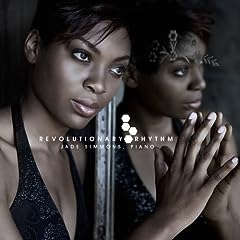 Jade Simmons wears her contrasting identities like a coat of arms, challenging the assumptions of what each identity should be or do.  Young black women aren’t supposed to like classical music; beauty pageant queens (Simmons was Miss Illinois and first runner-up for Miss America in 2000) aren’t supposed to be persons of real substance or significant talent; classical musicians aren’t supposed to intersect with popular music, or have time for such non-musical pursuits as teen suicide prevention (Simmons’s pageant charity platform) or high fashion (she designs her own concert gowns.)

Rather than shrug off such externally-imposed expectations, Simmons confronts them directly in her public persona, web presence, and recordings, crafting a vision of a youthful future for classical music.  Technology plays no small role in this endeavor.  Like many popular artists (but perhaps not so many classical ones), she’s on Facebook, Twitter, and MySpace, building a grassroots network of fans among classical buffs and youth alike; and lest you question her rank in the classical realm, it’s worth noting that she was asked to host the first online broadcast of this year’s Van Cliburn International Piano Competition.

This constellation (or revolution, as Simmons would have it) of identity, genre, and technology is evident throughout her new release, Revolutionary Rhythm. The album as a whole is the first installment of what Simmons calls The Rhythm Project, dedicated to exploring the rhythmic and percussive qualities of the piano.  It comprises four contemporary piano pieces: Russell Pinkston’s TaleSpin (2000) for piano and pre-recorded electronics; Samuel Barber’s Piano Sonata, Op. 26 (1949); John Corigliano’s Etude Fantasy for Piano (1976); and three of Daniel Bernard Roumain‘s Hip-Hop Studies & Etudes (2006).

TaleSpin combines the repetitive gestures of post-minimalism with electronic sound and dancelike rhythmic motives; as an album-opener, it has enough energy to catch a listener’s ear without sounding alienating.  The Barber sonata represents Barber’s foray into modernist techniques such as serialism, while still infused with Barber’s typical lush harmonies, and Simmons interprets its formidable fugue movement as a series of jazzy syncopations.  Corigliano’s Etude Fantasy, a lesser-known work, stands as a breath of stillness in the midst of the other pieces’ busier rhythms, as Simmons gives its stark left-hand-only opening plenty of space and deliberation.  Finally, DBR’s amalgam of hip hop beats and classical virtuosity in the Hip-Hop Studies & Etudes seems to herald one future for classical music:  it doesn’t sound like classical music trying to ape hip-hop, or vice versa, but suggests a more elegant fusion of the two, crafted by artists who understand both.  Although the piece was originally scored for solo instrument or ensemble, Simmons’s solo piano rendition includes pre-recorded hip hop beats laid under her piano lines (when she performs it live, she uses a loop pedal to self-accompany.)

Simmons’s technical skill and interpretive abilities shine throughout this album, making Revolutionary Rhythm not only a cohesive and interesting group of contemporary pieces, but a promising first step for an artist with a vision of where she wants to go.

Following is a YouTube clip of Jade Simmons talking about the pieces on the album: