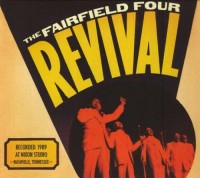 In the days of 78-rpm records and old-time radio, a cappella gospel music was big in the black Bible Belt.  One of the biggest groups was the Fairfield Four, with a nationally-syndicated radio show out of WLAC, Nashville.  The group’s roots date to the 1920s and there was still an active iteration of the group in recent years.  Gospel music evolved from the 1950s forward into favoring instruments, choirs and solo singers.  The older quartet style languished for a period, but slowly came back into fashion in the 1980s, according to Doug Seroff’s excellent booklet notes.

The music on this CD was recorded in 1989 (originally released only in cassette format) and captures a quartet of 70-something men who were riding the “old-time gospel revival” wave of that time.  None of these men were in the original 1920s lineup, but the Rev. Sam McCrary had been in the group from the 1930s through 1950s.

These recordings capture the Fairfield Four reaching back to its roots, singing in a style basically unchanged from the early 20th century.  A few years later, the group would sign with Warner Bros., appear with numerous music-business stars and find fame far beyond the deep south, including in the movie “O Brother, Where Art Thou?”  Rev. McCrary died in 1991, and the rest of this group had passed by 2005.  So this CD is a nice time capsule, a high fidelity version of a music style deeply rooted in the southern black culture and enjoyed for generations.

The good news is, the Good News never sounded better!  Age in no way diminished the quartets’ voices. The lineup is Rev. McCrary, Isaac “Dickie” Freeman, Wilson “Lit” Waters and James Hill.  Producer/engineer James Nixon and co-producer Wayne Hill (James Hill’s son) had the good sense to put mics in the right places and stand back and let these men sing. The quartet is clearly handling its own balances and dynamics, and the recording is detailed without being too intimate.

As far as the music, what’s not to like?  From the opener, “Hallelujah,” often used to open Fairfield Four concerts, to the closer, the very old spiritual “Roll Jordan Roll,” there are no duds among the 14 cuts.  The mixed-tempo version of “Swing Low Sweet Chariot” is a highlight, as is “Don’t Let Nobody Turn You Around,” which features high-wire vocal gymnastics by Rev. McCrary.  For fans of the bass register, it’s hard to beat Isaac Freeman’s deep-down lead on “Walk This Road To Glory.”

If a role of gospel music is to focus one’s senses and sensibilities to the glories and beauties of being alive, then the Fairfield Four accomplished their mission with aplomb with that 1989 recording session.  Their beautiful and powerful work can now be enjoyed by a new generation of fans via a modern medium.