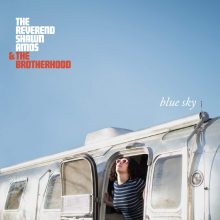 Opening with “Stranger Than Today,” featuring Rev’s daughter Piper Amos on backing vocals, the video single portrays life changes as the Los Angeles native is set adrift in the big sky country of Texas and attempts to make the best of it. Midway through the song, however, Amos picks up his blues harp to reflect on Little Walter and his sad demise, singing: “Mister Marion Walter Jacobs, never say goodbye/Soon after the altercation, they buried him alive/On his horse at 54th Street, stranger than today.”

While The Brotherhood lays the musical foundation, The Sisterhood comes to the fore on several tracks. “Troubled Man,” featuring Amos in a bluesy duet with Ruthie Foster, is a song that captures the current zeitgeist as they sing, “People believe what they want to believe, say the world is flat and on fire/I’m gonna preach what I know, I ain’t never letting go of the hope that I hold inside.” Kenya Hathaway (daughter of Donnie Hathaway) is featured on the reverential, gospel-tinged rock ballad “The Pity and the Pain” as well as the slow burning “Albion Blues.”

Though not as socially conscious as his previous album, Amos surreptitiously inserts a few history lessons into his lyrical storytelling. For example, “The Job Is Never Done” references the split of the Baptist denomination over slavery and takes us to church with a soulful Hammond organ groove. Other tracks range from the jump blues of “27 Dollars” to the fuzzy guitar laden rock of “Counting Down the Days,” the latter expressing Amos’s love/hate relationship with his newly adopted state. Closing with the celebratory “Keep the Faith, Have Some Fun,” Amos urges us to look on the bright side and “spread a little joy to everyone” as he weaves harmonica licks through the funky horns of The Mudbug Brass Band.

Amos, who spent a couple of decades in the music business as an A&R executive before founding a digital media company, now seems fully committed to a career as a full-time musician. With the backing of The Brotherhood, the Reverend Shawn Amos offers one of his best efforts yet on Blue Sky, with a mix of rootsy blues and soul that’s sure to resonate with a wide range of listeners.