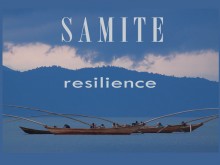 Ugandan flutist Samite will officially release his eleventh album, Resilience, later this month. “This music is dedicated to the resilience of the human spirit,” writes Samite. In fact, the inspiration for this album was taken from the juxtaposing scenes he witnessed as he looked upon the beautiful, peaceful landscape of Lake Kivu while listening to the music his families and friends were making together—all along the backdrop of one of the deadliest civil wars in the Congo.

Resilience should be seen as a manifestation of Samite’s lifework of showcasing the “power of music.” In addition to making a living as a touring musician, he collaborated with filmmakers of the documentary Alive Inside: a film that showcases how music can aid with memory retrieval in people who experience dementia. Samite also works with Musicians for World Harmony, an organization that focuses on bringing “the healing power of music into communities in upstate New York and around the country.” As if that were not enough, he frequently visits homes and schools (K-16) to perform and showcase the “power of music.”

Across the album’s twelve tracks, Samite alternates between vocals, flute, litungu, adungu, and bass. Other musical collaborators include David Cullen on guitar, bass, and keyboards, Tony Cedras on guitar/strings and piano, Tristan Jarvis on bass, guitar, and keyboard, Frank Paco on percussion, and Nate Richardson on guitar. The group manages to create a soundscape that makes Samite’s belief in the healing power of music all the more apparent.

For example, Samite was moved to pen the meditative track, “Space,” as he took in the view of his horses and gardens from his studio window. “Waterfall,” on the other hand, was inspired by his time as a refugee. He says that the song was written to “transport him back to the rivers, lakes and mountains of Uganda.” The final track, “Ntinda,” is a heartfelt, soulful addition—a rearrangement of a traditional folk song his mother and Aunt sung to him in Uganda.

Resilience transports the listener to the spaces and places Samite has carried with him throughout his life. Perhaps this transportation is bound to occur because music certainly does have the ability to reach the soul, or as Samite puts it, “the human spirit.”