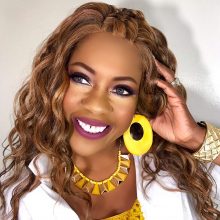 Billboard-charting gospel singer/songwriter/producer Renee Spearman has worked in the gospel music recording industry for over three decades and continues to champion her genre. After “standing in the shadows” for many years as a background vocalist for numerous popular music artists including Gladys Knight and Yolanda Adams, Spearman’s solo career took off in 2012 with the release of her successful debut album, Whoa to Wow!, which reached #4 on the Billboard gospel album charts. Her recent release, I Love Him, is yet another career highlight.

The album includes the radio hits “Tap Into It,” featuring Dorinda Clark Cole, and the title track “I Love Him” with Bishop Hezekiah Walker and Dr. Holly Carter. Spearman also pays homage to gospel psalmist Verona Brown and the Mississippi Mass Choir with her cover of the 1989 gospel music classic, “Having You There.”

I Love Him is a sophisticated blend of praise and worship featuring some of gospel’s most prominent musicians and producers including Eddie Brown, Michael Bereal and Professor James Roberson. Spearman is truly an asset to the gospel music recording industry and I Love Him is a testament to her great work.