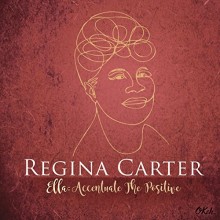 Jazz violinist Regina Carter’s newest album, Ella: Accentuate the Positive, is an ode to the music of Ella Fitzgerald in celebration of the 100th anniversary of the singer’s birth.  Featuring nine arrangements of Fitzgerald’s songs, this album puts Carter’s imagination on full display.  This is not her first foray into Fitzgerald’s catalog, having recorded both “Oh, Lady Be Good” and “A-Tisket, A-Tasket” on previous albums.  For this project, though, Carter goes deeper into Fitzgerald’s music, recording not only her well known tunes but also some lesser known songs, such as “Judy” and “I’ll Never Be Free.”

Carter’s technique is flawless throughout the album, but highlights include her wide vibrato on “All My Life,” as well as her blues slides on “I’ll Chase the Blues Away.” One of the best takes on Ella’s work is on “I’ll Never Be Free.” Carter’s version becomes a gospel blues song, but the tone of her instrument still holds onto and exemplifies the clarity of Fitzgerald’s voice.  In this way, Carter’s arrangements evoke a variety of genres, including jazz, blues, gospel, and R&B, to name a few. Two of the tracks on the album feature vocalists Miche Braden and Carla Cook, and  Carter’s interaction with them, particularly on “Undecided,” is impressive. Other collaborators on the album include bassist Chris Lightcap, drummer Alvester Garnett, pianist Xavier Davis and guitarist Marvin Sewell.

Carter has a long history of drawing on influences in her personal life for her music. I’ll Be Seeing You: A Sentimental Journey (2006) features her mother’s favorite jazz standards, whereas in Southern Comfort (2014) she traces and interprets her own heritage through music.  In Ella, Carter reimagines Fitzgerald’s catalog, retaining her spirit but giving her listeners a fresh take on old classics.  The result is a stunning combination of range, with Carter expanding on the depth and creativity already so present in Fitzgerald’s work.