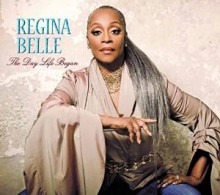 Regina Belle is a versatile singer and songwriter who has moved between the worlds of jazz, R&B, and gospel. She is also an actress who famously sang “A Whole New World” with Peabo Bryson in Disney’s Aladdin. Her first album in fifteen years, The Day Life Began, is full of classic, inspirational R&B songs produced by Jamie Jones and Jack Kugell of The Heavyweights.

The Day Life Began features many R&B love songs, such as Regina’s own original ballad “You Saw the Good In Me,” the orchestral “A Night of Love,” and the upbeat, funk-infused cover of Reggie Lucas and James Mtume’s “You Know How to Love Me:”

Though the album focuses on R&B, Regina’s multiple influences are apparent, such as the gospel choruses in “He’s Alright” and “The Day Life Began,” which celebrates multiples milestones in Regina’s life, such as the birth of her children and the first time she won a Grammy.

The album ends with a version of Steve Diamond and Allen Shambin’s “Be Careful Out There,” which Regina said she chose because it reflects her emotions as her children all move away from home. This kind of personal connection to her songs is seen throughout The Day Life Began, as Regina reflects on her past while reminding listeners that her voice and her passion for music are as strong as ever.