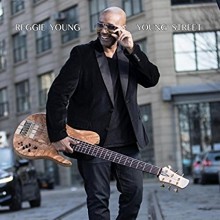 I must come clean—next to trumpet, the bass is my second favorite instrument. So I also must admit, I was unfamiliar with Reggie Young. When I think of bass players, I think of Jaco Pastorious, Stanley Clarke, Louis Johnson, Larry Graham, Victor Wooten, Will Lee, Sir Paul McCartney. Reggie Young, where have you been hiding, my man?

Hailing from New York, Young is a Grammy Award winning session bassist who has performed with the likes of Lenny Kravitz, Alicia Keys, Paul Shaffer, Stevie Wonder, Will.I.Am, and Reuben Studdard. His latest project, Young Street, is funk with a touch of jazz, rock, soul and even Bazilian bossa nova.

Young Street opens with the title cut featuring Young on bass, Garnett Walters on the B3, and Bill Hollerman on horns. I’m certain this track made the cut on urban jazz radio. I personally enjoy when an artist can step out of their comfort zone and throw a curve ball at you. The track “Naima” is just that—a composition by John Coltrane that would intimidate some. Not Reggie Young. He goes in on it, not to one up the great Trane, but more to show that he’s not a one trick pony. Speaking of which, you can find Young singing over his bass riffs on the funky “Alright With Me” and the lush strings on “Magic.”

Reggie Young has accomplished great deal even if he’s not a household name. No more hiding Reggie, I know where to find you now.