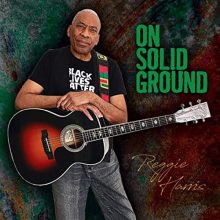 Opening with It’s Who We Are, Harris sings about the “universal struggle, fed by vicious lies” as he breaks down the myth of American exceptionalism and reveals its sordid underbelly:

One of the great storytelling tracks on the album, “Standing in Freedom’s Name” tells the tale of Rev. C.T. Vivian’s iconic encounter with the virulent racist Sheriff Jim Clark in Selma, Alabama, in 1965 as he fought for the rights of Black residents who were attempting to register to vote. This very timely protest song serves as both cautionary tale and urgent call for action as the “forces of oppression are still here for every eye to see.” Other songs on the album strive to convey peace and harmony such as Harris’s rendition of the Beatles’ “All You Need Is Love” with Baltimore-based jazz pianist Eric Byrd and the vintage Broadway styled song “Maybe It’s Love.” Closing with “High Over the Hudson,” Harris offers a final tribute to his friend and mentor, the late Pete Seeger, who served as an inspiration over the decades.

On Solid Ground offers a little something for everyone, but Reggie Harris’s hard hitting, provocative tracks that address injustice, encourage dissent, and challenge the status quo are definitely the highlight of the album.